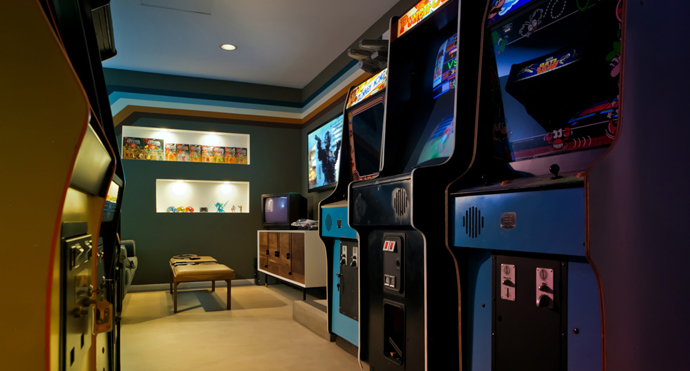 When there’s no basement in a home, all the spare bedrooms are occupied, and the wife has squelched any plans of games in the dining room, possibly the only logical place left to create a gameroom can be the garage. Many owners of these “Garcades” (a combination of the word garage and arcade) are pleased to have a space to call their gameroom, but for most that space is simply used to hold a random smattering of games with no real thought to design other than cramming as many games into that limited space as possible. Many owners still utilize the other half of a 2-car garage for its intended purpose of storing a car, and the thought of turning the exhaust-filled room into an extended living area is usually out of the question. There is one garage, however, that can no longer be recognized as such. Instead, the door to this garage opens to reveal a garcade that is both retro and modern, recreational and livable, and basically, downright awesome!

When designing this room, Joaquim, the owner, had one goal in mind: build something that would make the 10-year-old version of himself blow a gasket! It had been many years, but Joaquim can still remember watching the old television show “Silver Spoons” and being in awe of Ricky Schroeder’s character having real stand-up arcade machines in his home. To him, back then, owning an arcade game was only something to dream about. However, once he was 18 and able to own his very own Star Wars cabinet, Joaquim realized that his dream would be a reality.As fans of both contemporary and mid-century modern design, Joaquim and his wife set to work designing a gameroom that was both aesthetically pleasing and more than just “a garage full of games.”

“Initially I planned the whole thing to just be an arcade with no real living area. Just a garage full of games. After some discussions with my wife about it she suggested that we should have a little nook that guests can hang out at in between playing the games. At first I went crazy ambitious and was planning to do a sunken retro living area with built in couches and that sort of deal but the realities of a budget for that, much less the space it would take up made me quickly re-think things a bit. So we took a bit more of a conservative approach but really tried to focus on keeping the design choices simple, clean, retro but still modern all at the same time. “ 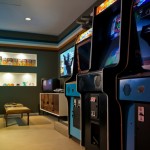 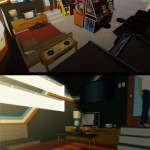 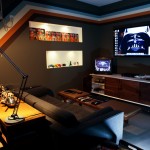 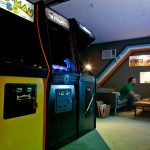 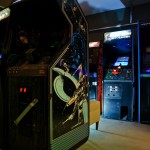 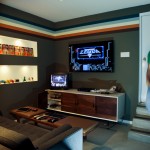 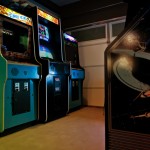 Using Google Sketchup in the design process was a big help. Working in animation, Joaquim would occasionally use Sketchup to build rough set designs, but relying on the vast resources available through the program including over 500 pre-built cabinet designs made its use a no-brainer. While the game lineup and layout was important, so too was the opportunity to highlight some other geeky habits and hobbies.

Lining the wall are two built-in book shelves that literally showcase geekiness. Although the showcase allows for frequent rotation, one obsession that will remain prominently featured is a toyline by the name of Crystar. According to Joaquim, one of his best friends in the second grade had a Crystar figure that captivated his imagination. Despite offering every toy he owned as trade, his friend refused to give up the coveted figure. Now, with the help of eBay, almost the entire Crystar toy line along with other influential childhood memories from G.I. Joe to Masters of the Universe are proudly displayed for all to see.

In addition to the previously mentioned Star Wars cab, the acquisition of a Discs of Tron was what really spurred the current collection that now includes classics such as Donkey Kong, Gyruss, Spy Hunter, Tron, Pac-Man, and more. With limited space, how can one incorporate as much classic gaming as possible into one space, you ask? Why, with retro console games of course! Tempting all who sit on the couch are classic consoles like NES, Super Nintendo, N64, Gamecube, and the modern Nintendo unit – Wii. And that’s just in one cabinet! In the other cabinet, you can find Sega Dreamcast, Playstation 1 and 2, as well as an X-box 360. The drawers hold all the assortment of games for the units with even more classic games with handheld units such as Digital Derby and an old Tomy Pac-Man waiting in the wings.

Though few would find much to change about this amazing set up, Joaquim is currently piecing together a Track and Field cabinet to add to his collection. And with his collectible displays always in rotation, Castle Greyskull and other MOTU figures will soon line the walls. Lastly, to complete the modern/retro decor, the couple would like to add a nice simple shag rug to go into the living area that’ll harken back to the 70’s and 80’s. It may have taken nearly a year in the making, and the help of, as Joaquim describes her,  “the coolest wife in the world who totally supports my geeky habits,” but a childhood dream has finally been realized. No longer a dream, this reality is something that would even make Silver Spoon’s Ricky Schroeder jealous.

To see more cool stuff that Joaquim has going on and is interested in along with some of his artwork, check out his Tumblr website. If you like the photos in this article, then check out the website of the photographer – Ben Tsui. If you have a gameroom that you’d like us to feature, just drop me an email at gameroomjunkies@gmail.com