I follow some interesting folks over on Twitter. One of those people is Tighe Lory. You may recognize his name as he gained some notoriety a while back for building a custom arcade cabinet to house the classic Nintendo gaming system – Virtual Boy. When he’s not busy creating custom arcade cabinet designs, he can probably be found in his gameroom playing his favorite titles from yesteryear. Recently, through Twitter, I have been following his progress on his attempt to lose weight. However, this isn’t your typical fad diet. This does involve diet, but also a lot of fun-filled exercise as well. Tighe was gracious enough to take time out of his busy workout and gaming regimen to answer some questions for me.

GRJ: Tighe, over the past few months you’ve been trying something pretty interesting in your gameroom – playing arcade games to lose weight. How did you come up with that idea?

TL: I know that I have had the idea even before I got my Propcycle.  I think it first occurred to me back when Propcycle was new in the arcades.  Back then I was in great shape and didn’t need to lose weight.  I am certainly not the only person to have thought of using Propcycle to lose weight.

GRJ: What’s Propcycle? I’d never heard of it before. 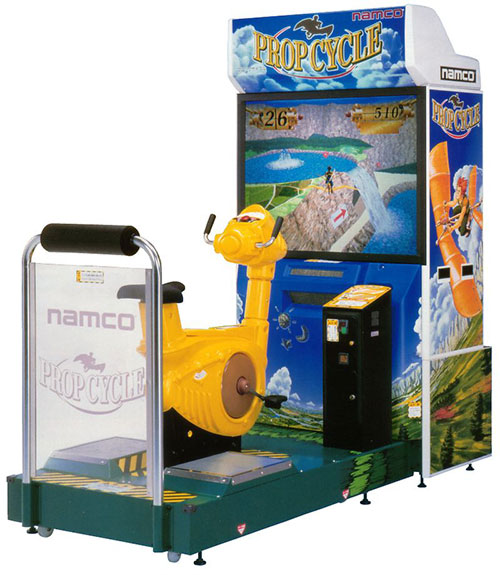 TL: Propcycle is an arcade game released by Namco in 1996, it was part of a series of large simulator games made by Namco at the time, others were Alpine Racer, Alpine Surfer, and Aqua Jet.

In Propcycle you are a young lad in a steampunk style future. Part of the Earth (Solitar) has taken to the sky. This happed because someone accidentally activated an ancient forgotten nuclear reactor.  You must pass 3 training stages where you prove your ability to fly into balloons and pop them with what Namco calls a Laperopter (flying bicycle).  Then you have one chance on the final stage to save Solitar and shutdown the nuclear reactor and return it safely to the earth.

The gameplay is very similar to Pilotwings 64 on the N64 and Pilotwings Resort on the Nintendo 3DS.  The big difference is that you must actually pedal a stationary bike to propel your character on screen.

GRJ: How did you come about owning this game?

TL: I drove out to Syracuse to buy it from KLOV member chas010.  I had to completely disassemble it to load it into the trailer and bring it home. Once I got it home it was quite the task getting it into my basement and reassembling it.

Even then it was missing a seat, control panel and the fans that simulate wind were broken.  But I have it back together and working now.

GRJ: What’s your daily routine like as far as gameplay and other steps toward weight loss?

TL: My routine started out just with Propcycle and limiting calories in the beginning, I started at 306 pounds on February 3, 2012.  Before starting my metabolism was really low so Propcycle helped me get it going again.  I get up at 5:00 AM and ride Propcycle for 30+ minutes then do 15 minutes on an Elliptical.  Then during my lunch I would walk 2.3 miles.

I use the Android/iPhone app LoseIt to track my calories, and Endomondo for tracking my exercise.

About 2 weeks ago I discovered I was doing all this exercise on a broken foot, so now I am in a soft cast until that heals.   This has put the exercise on hold, but I have managed to maintain my current weight of 273 pounds.  I am getting a walking cast later this week, and if it works out I would like to get back to riding Propcycle at least.

GRJ: I understand you’ve gotten pretty good at the game and have broken some records, tell me about that.

TL: Well I can beat the 2nd place high score pretty easily now, and am getting close to the world record in Twin Galaxies, but I fear that the record was done on the easy setting not the default intermediate setting that Twin Galaxies says is the official setting.

One I have befriended a Japanese gamer dacchaprop who easily can blow away the Twin Galaxies world record, but he doesn’t have a Propcycle of his own, so he can only play on machines in arcades that are set on the easy setting.  He has been mentoring me on the best routes and stage orders to get the best score.  I wish I could get him access to a Propcycle set to Twin Galaxies official settings, because he really is very good at the game.

GRJ: Since you’ve been playing this daily for long stretches at a time, have you gotten sick of playing the game?

TL:Not really, it is quite a challenging game to have the stamina to play for any long periods. Playing it 30 minutes a day doesn’t get boring.

GRJ: Ever thought about expanding to include DDR (Dance Dance Revolution) type machines? I’ve heard of other people using them to lose weight successfully.

TL:I would want to wait until I was under at least 250 pounds before I would take on a high impact game like DDR.  If you notice all the good players are probably under 150 pounds.  What I would like to see is more arcade games that not only measure your coordination and reaction time, but your strength and endurance too.I have been considering finding a 1987 Sega Heavyweight Champ. This would be a great game for building upperbody strength.  Konami also has a newer boxing game call Mocap Boxing, which looks good, but a little detached.  I like to actually be able to hold the controls in my hand.

GRJ: If not propcycle, what would be the one classic arcade game you could play every day for the rest of your life?

TL:Wow, that is a hard thing to commit to, almost like getting a tattoo, it will be with you for life.  While I love my Galaga, Galaxian, Gaplus, Donkey Kong, etc. I would have to go with Street Fighter II Turbo.  I have probably played that game the most of any game, and I still love it. I might say Rastan too, I love that game and it is hard but you can get good at it.

GRJ: How successful have you been in your weight loss journey so far? How much farther would you like to go.

TL:Well I was able to lose 33 pounds in little over a month.  I am very frustrated with this broken foot.  I don’t even know how I did it. It has been bothering me for probably over 6 months.  I figured it would get better when I lost weight, but when it got worse I decided to go the the podiatrist.The plan is to get down to the weight I was in 1996, 205 pounds minimum.  I am 6’1” so my ideal weight is 186-192 pounds so I would like to get down to 190 pounds.  I cannot imagine weighing less than that, I know what I looked like when I was 200 pounds and I was very thin!

GRJ: Lastly, you previously gained some notoriety for the custom Virtual Boy cabinet you created a while back. Anything neat or unique from you in the works?

TL: Yes, two projects are in the middle of being made right now.  One is to build a custom cabinet of the Game Boy game Donkey Kong that was released in 1994.  This is not the Donkey Kong Country game, but what I consider to be the true sequel to the arcade Donkey Kong.

The other project is rebuilding an old Galaxian that had been converted to at least 3 other games, into a custom cabinet for the arcade game Galaga ‘88.  By the time Galaga ‘88 was released Midway had lost the licensing rights from Namco.  Atari licensed the game in the USA, and they put it in probably one of the most ugly arcade cabinets ever. Hot pink and yellow gold on a white cabinet, a horrible 8 way joystick for a game with 2 way controls.  It was a travesty.

My plan is to use the artwork from the Japanese flyer and put the game in a Midway Galaxian cabinet, which is very close in design to the early arcade cabinets that Namco produced in Japan.

I also have ideas for other future custom games, but I really need to finish these before I start anything new.  If you want to see what I am up to you can always subscribe to my Youtube channel.  I also have a blog and I am on Twitter and Google+.

Thank you for taking the time to speak with me today! I wish you continued success in your weight loss journey and I look forward to whatever interesting ideas you come up with next.