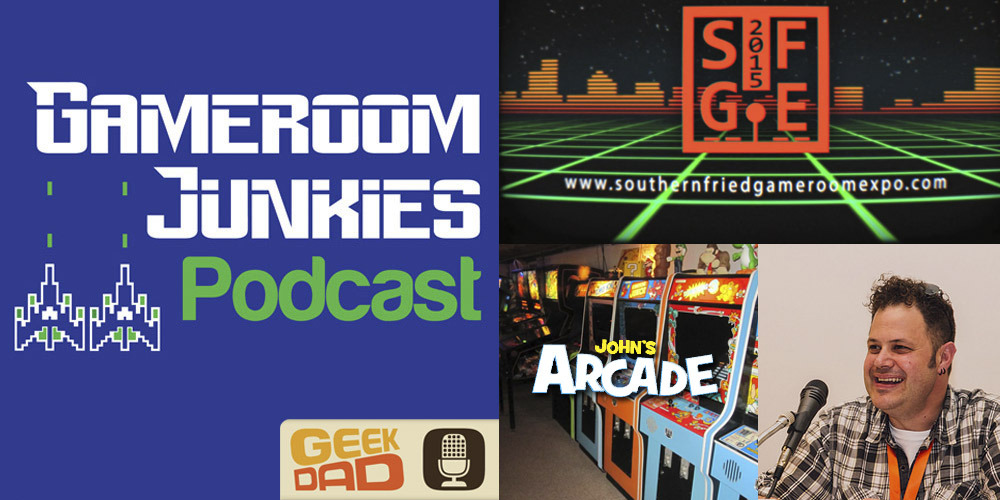 We had such a great time at the Southern-Fried Gameroom Expo, we’re back a little bit early with another great interview. The bulk of this episode is an interview we recorded live at SFGE with long time arcade collector and YouTube celebrity John Jacobsen. John is the host of John’s Arcade, a popular YouTube channel featuring arcade game restoration, how-to guides, collecting adventures, gameplay tips, and more! In addition to his video series, John is co-host of Video Game Outsiders, Arcade Outsiders, and part of the band The Kill Screens.

In the interview, John talks about how he got into the hobby, how his tastes in collecting have changed over time, and what game he would never sell. With John’s Arcade over 20K subscribers, Jacobsen gives some tips on what it takes to have a successful video series and podcast. John’s basement collection currently contains 35 games, and it is obvious that each on has a story behind it, and a special place in John’s heart. (Disclaimer: John is very animated when he speaks, and there is noise when he bumps the table as he talks with his hands throughout the interview.)

Before the interview, your hosts Patrick and Preston talk a bit about the new reality TV show sizzle reel, Pinballers, and whether it’s a good fit for pinball. Sticking with the pinball topic, Patrick goes into detail about his new pickup of a PinSound circuit board to bring his Star Wars pinball machine out of the disco era. Finally, Preston details some of his new gameroom additions including his late-to-the-party Wii U acquisition and newly-constructed LED-lit shelf for collectibles.

Don’t forget, you can listen to Gameroom Junkies by using the streaming player above, or you can subscribe to us on iTunes or Stitcher. If you like the show, please leave us a review. You can also find us on social media though Facebook and Twitter. We hope you enjoy the show!