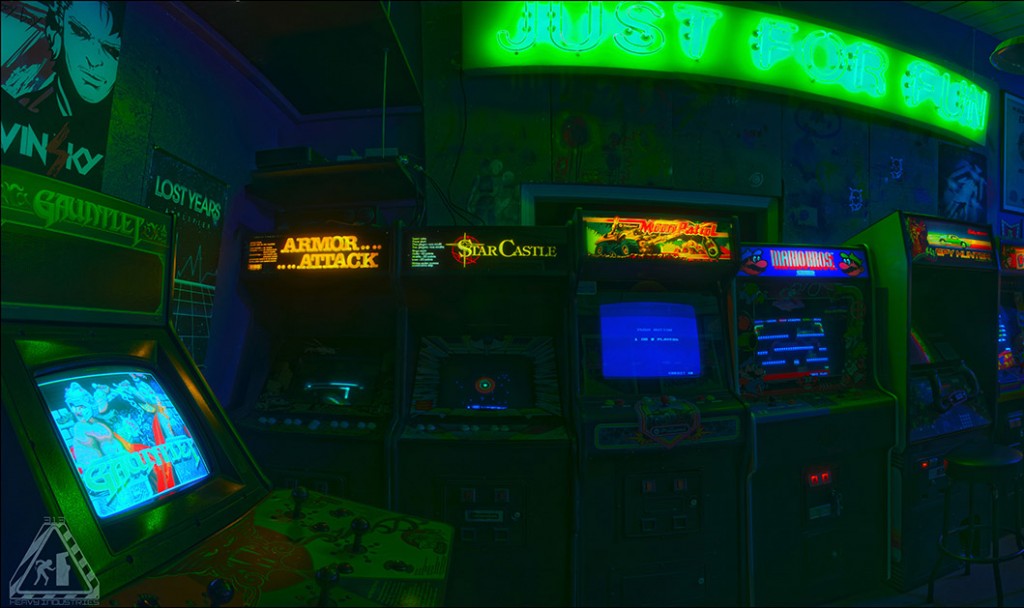 Green neon light casts an eerie glow over dimly painted cement walls. Covered in luminescent graffiti and relics from the past, those same walls reverberate sounds from over thirty years ago. Does this room contain some sort of dystopian future or is it a time machine to the past? Neither. The room in question is Studio 313, the personal arcade of Grant Garvin, and those relics from the past are more than twenty classic arcade games anxiously awaiting their next player.

Though the impressive lineup of video games is undoubtedly the first thing visitors to Studio 313 notice, the unique atmosphere is a close second. That’s by design says the home arcade’s curator:

The style of my arcade was very much drawn from 80’s Cyberpunk book and film influence. While I was creating it, I was imagining what a hidden, classic arcade would look like in a dystopian metropolis. Much like our hobby centers around the restoration and appreciation of these classic games, I considered what a collector would do with these games in a universe like “Blade Runner” or “Snow Crash”, and the look of the place flowed from that. From the industrial elements, to neon everywhere, and even blacklight reactive graffiti, I wanted my space to be kind of retro-futuristic, and almost a little dangerous looking.

The largest neon light helping to achieve the futuristic look Garvin mentions happens to have some history behind it as well. The twelve foot sign bearing the words “Just For Fun” was discovered in a barn covered in dust, having been forgotten for many years despite its original function as a marquee for an arcade of the same name. Though the Western Massachusetts arcade for which it was created closed in 1986, the ambient light it casts is a perfect match for its new home. 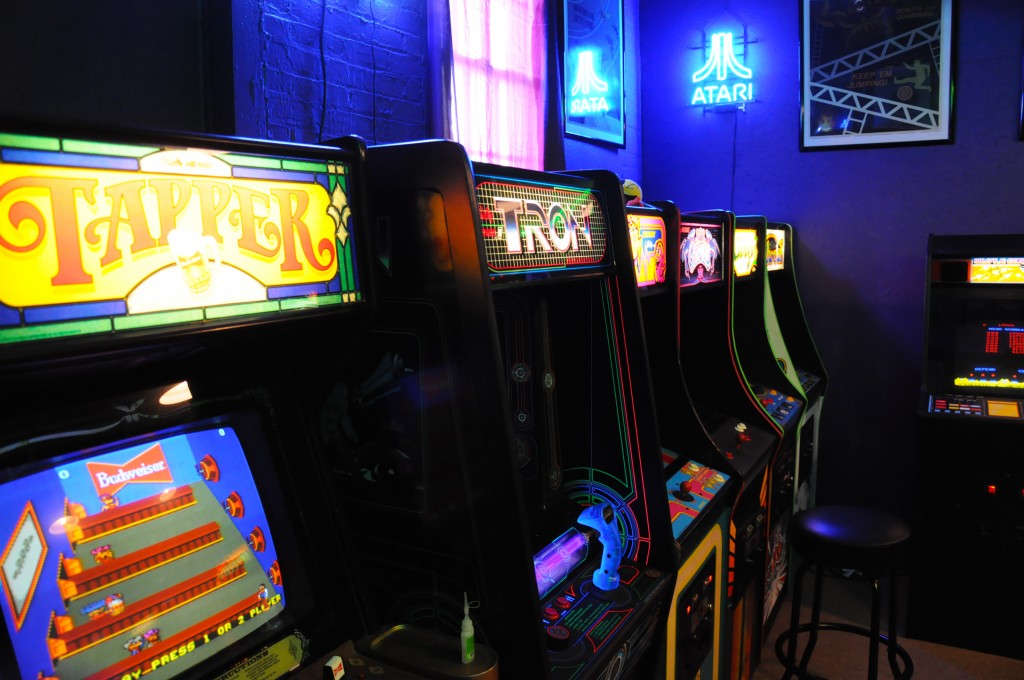 Garvin’s personal collection includes some of the most popular games from the golden age of the arcades with such titles as Asteroids, Galaga, Tempest, Ms. Pac-Man, and his personal favorite Tron. His desire to have such classics as part of his collection stems from an early exposure to gaming. Some of his earliest memories are those of standing in a shopping cart as a four or five year old in order to play (and beat) much older challengers on the arcades in the snack bar of his local department store. His infatuation was encouraged from that early age by his parents who seemingly took delight from such a young kid beating teenagers on Joust and Space Duel. Young Grant was hooked. While his friends began obsessing about the Atari 2600 home console, he remained true to his love for the actual arcade which persists to this day.

Having experienced the second arcade boom as a teenager and seeing lines of people nearly twenty deep clamoring to play the newest fighter like Street Fighter II, it was only appropriate that the first arcade he would purchase for his collection was Mortal Kombat conversion he bought for $50. Many games have come and gone since that first purchase, and his collection now boasts just over forty cabinets, some of which are on display at TempleCon, an event Garvin organizes each year. In addition to even more classic titles such as Tapper, Galaxian, Spy Hunter, and Gauntlet, Studio 313 also contains some rare lesser-known gems. Next to an unusual looking Q*Bert cabinet stands the similar looking War of the Bugs and Jungle Prowl. Manufactured and sold in a grey market by Glak they are perhaps the only ones currently known to exist. 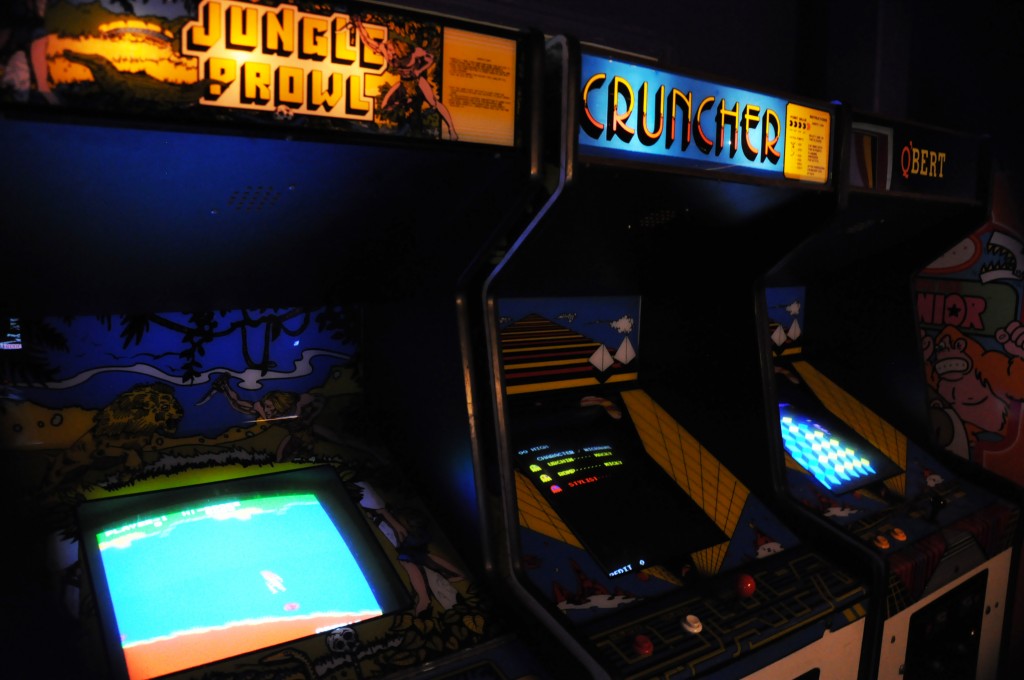 Though the main attraction for most people is the games themselves, for Garvin, the games are secondary to the forgotten feeling they provide:

“When the classic model of the arcade began to die off, it wasn’t being replaced by anything. The concept of competition within a community that the arcade experience offered was quickly becoming nothing more than a memory. Anyone that experienced that era knows that there was nothing cooler than being completely in the zone with a game, having no other awareness of anything else outside of you and the controls, except for the indescribable feeling of a crowd slowing growing behind you, watching you win or lose. I think a lot of why I’ve put so much effort not only into restoration of arcade games, but also exposing them to the public by bringing my collection to events, is to reconnect people to that same feeling.

I truly do think that this hobby is less about nostalgia than a lot of people think. The fact remains that despite the age of these games, the actual game play value of them is just as relevant as it was 30 years ago, and in many ways their clever and ruthlessly challenging design surpasses a lot of the elements found in modern gaming. While arcade games were obviously part of my youth, I’ve never quite felt that I spend so much free time curled up with a multimeter and logic probe in the back of these things because I’m trying to recapture that enigmatic feeling of being a kid, as I never completely stopped being one in the first place. If anything, I pursue this hobby for the future, not the past, to allow people of all ages to create their own memories and fun involving them, as I was fortunate enough to be able to.” 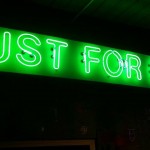 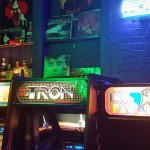 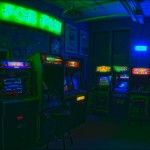 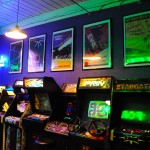