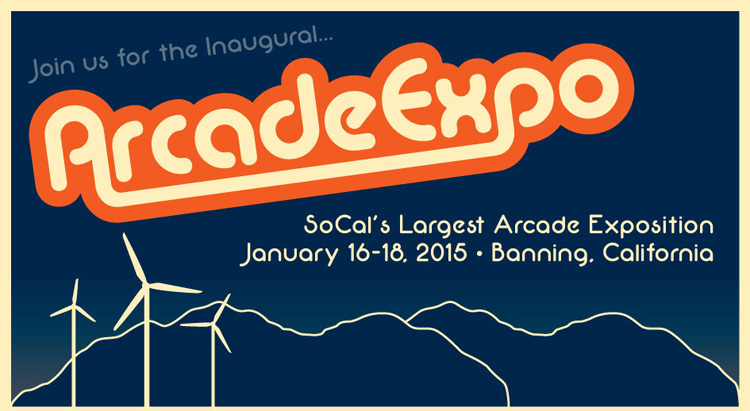 With less than a month away from their first event, we took some time to ask a few questions with our recent sponsor, David Trotter of Arcade Expo. Arcade Expo is the largest arcade and pinball convention in Southern California and boasts over 750 games available for play January 16-18, 2015. Gearing up for an event like this takes some serious time and commitment, so we’re thankful David could answer a few of our burning questions.

GJ: Arcade Expo is unique in it’s approach, in that the location is a permanent facility and the games are not supplied by volunteers. How did that come about?

DT: Having been bitten by the pinball bug early in life, John Weeks started collecting pinball machines about 20 years ago and quickly amassed quite a collection. While carefully storing them at his own business and in other warehouses, he always hoped to find the perfect location to create a Museum of Pinball. Property is extremely expensive in southern California, but he was able to find a creative opportunity in Banning, California – a short drive from Los Angeles, Orange County, and San Diego.

GJ: I recall a past Kickstarter trying to raise money to refurbish the facility. What sort of progress has been made to recondition the building despite not reaching your goal?

DT: Through the hard work of numerous volunteers, quite a bit of donated supplies, and a few bucks of our own, we’ve transformed the space into quite the destination location. We think people will be impressed when they walk in and experience the one-of-a-kind location.

GJ: How many games will be available for play during your event? Any rare or unique ones to be on the lookout for?

GJ: When you’re dealing with that many games, do you plan on having repair techs handy?

DT: We plan to have an entire tech team ready to help out with any issues that arise.

GJ: I know this is hard to answer with this being your first event, but what sort of attendance are you expecting? Do you have a target goal in mind?

DT: Our goal is 1,000 people for our first event, and we’re pushing hard to see that happen. We’ve spread the word far and wide to the pinball community, people who might be interested in southern California, and of course the specific area surrounding Banning.

GJ: There are several other arcade and pinball shows around the country, what do you feel makes Arcade Expo stand out against the rest?

DT: For one thing, this is a single collection within the Museum of Pinball, a non-profit corporation, and it’s housed in a permanent location. While we’re currently working with the city of Banning, CA, to allow us to have regular hours of operation, we’re now allowed to have two events a year. Not only will there be workshops, film screenings, and live musical entertainment, but we’ll also have food and beverages for sale. This isn’t a hotel environment. We’re talking about a destination location that is specifically focused on gaming. Did we mention there are seven airports within a two-hour drive?

GJ: Tell me a little about your upcoming World Record attempt.

DT: We wanted to do something fun at our first event – something people would truly remember. So, we’re attempting to break the world record for the “most people playing pinball simultaneously.” Currently, the record is held by the Texas Pinball Festival with 272 people, so our attempt will take place on Saturday, January 17th at 2pm. Everyone is obviously welcome!

GJ: In addition to the games, what else can people expect to experience? Any special guests?

DT: Not only are we excited to have Richie Knucklez and David Dagger Danzara hosting nightly movies, but we have Walter Day unveiling collectible trading cards and Roger Sharpe participating in a Q&A. There are other workshops, quite a few tournaments, and surprises that we can’t mention. You’ll have to show up to experience it.

GJ: Anything else you’d like to tell us about the first Arcade Expo?

DT: There’s only one inaugural event, and you don’t want to miss it. You’ll definitely want to say that you’re at the first one!