As an established arcade and pinball collector, Rob McDole, was experiencing a what some might call a “good” problem – he had too many games, and nowhere to store them. His previous storage location was no longer available, so Rob refined his search for something much closer, and this time, with adequate power for repairing and playing the games he was collecting. As an afterthought, Rob sent an email to Railroad Square Art Park, a local Tallahassee “creative haven” that houses 50 studios, small shops, and galleries housed in a former industrial park. To his surprise, they said “yes,” However, what started as one man’s need for storage, quickly morphed into a desire to foster both the local collector and non-collector community. With that idea, Arcade Age was born.

I found an interior space of about 550 sq. ft. for a very reasonable price and it had electricity included. Shortly thereafter I started thinking that maybe the space would become something more than my own personal workshop. I could open it up to other area collectors/hobbyist or just those interested in learning more about arcade and pinball games. Basically, create a makerspace for hobbyists (something I’ve been wanting to do for a while). The memberships would help to offset my monthly rent and give the members space to bring in their own games, have all-hours access to the shop, the supplies, and the tools. 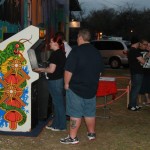 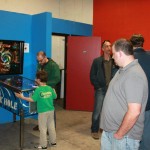 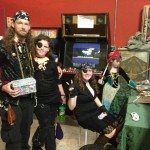 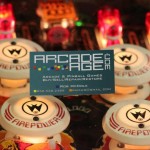 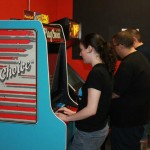 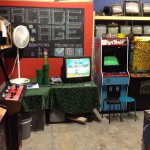 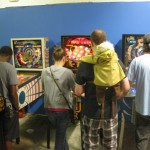 But Arcade Age doesn’t just keep its treasures hidden behind lock and key, they want people to enjoy the games they work hard to preserve. Twice a month, Railroad Square opens up to the public to allow for up to 8,500 visitors to roam freely, for which Arcade Age gladly opens its doors, rearranges the work area for public play, turn on all the working games, and allows visitors enjoy these classic games for free. Keep in mind, this isn’t designed as a money-making venture, but rather a way to preserve the games themselves, and also the public consciousness of classic gaming.

With only five known pinball games and a handful of classic arcades on route in the Tallahassee area, Arcade Age is doing its part to raise public awareness for these time capsules of nostalgia,

It’s rewarding every time you have that kid come in and ask their parents what a pinball is or see a 40-year-old literally jump for joy when he spots a game from his youth.

Money generated from game sales along with a few donations gets immediately rolled back into the shop to make way for supplies, tools, parts, or even more games. After 4 months in operation, they typically have anywhere from 3-4 pinball machines and 6-8 arcade games available for play during the “First Friday” open houses. Additionally, 5 games have been repaired and sold to new owners.

In the future, Arcade Age hopes to run repair workshops to show collectors and enthusiasts how to do simple maintenance and even complex repairs like cap kits to help spread the knowledge that these machines are still able to be repaired and enjoyed. Their current space may not be able to contain their ambition and a new, larger space within the same facility may be on the horizon. Whatever the future may hold, McDole and the rest of Arcade Age will make every effort to continue to raise public awareness and promote the love of classic gaming!

Arcade Age is located at 629-D Industrial Drive, Tallahassee, FL. Or you can visit them online at www.arcadeage.com