One of the advantages that pinball machines have over other gameroom items is the fact that they allow for a significant amount of modification (or “mods”) and upgrades. These mods can add a personal touch or a certain amount of “bling” to a factory-produced game. Think your game is too dull? Add some strategically placed LEDs! Don’t like the factory siderails? Upgrade to chrome! Let’s take a look at some general (along with a few game-specific) upgrades for pinball machines that you can add to spice up your lineup. 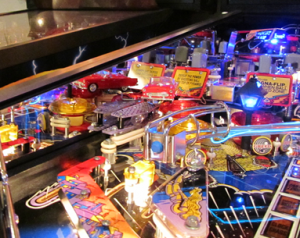 If you’re looking to add some depth to your playfield or brighten up your general illumination, then look no further than Mirror Blades from Pinball Decals, Inc. These laser-cut mirror-polished sheets of stainless steel install on the inside of your cabinet on either side of the playfield. Perfect for a game with a lot of vibrant colors, playfield toys, or unique lighting, this quick and easy mod will add an increased depth-of-field perception along with an instant “wow!” factor. They can be purchased for $124.99 and new “black mirror” and “gold mirror” versions for $249.99. 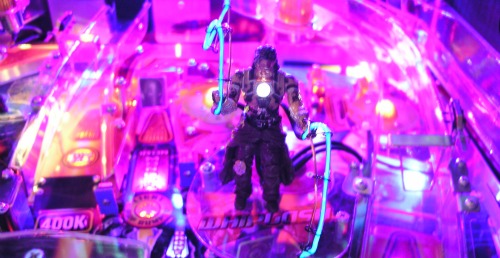 EL, or electoluminescent, wire has been around for a few years, but only recently has become a go-to upgrade for pinball machines. Stern Pinball’s Tron: Legacy wasn’t necessarily the first pinball machine to incorporate this effect, but with the popularity of that title, EL has now become a hot commodity. EL wire distributors now sell easy do-it-yourself kits that allow homeowners to spruce up their games by simply hooking in to the games service outlet. The picture you see is an example of an EL wire upgrade to the Whiplash toy on an Iron Man pinball machine from Pinball Bash user Jackal2001, but that’s not the only game you can upgrade. You can use EL wire to wrap pinball ramps and even get your non-EL Tron Pro to look almost like a Tron LE for just $100!

Thanks to the creativity of some pinball enthusiasts, there are several custom after-market signs for pinball machines. DK pinball recently produced the Flynn’s Arcade sign to add next to the video game scoop on Tron Legacy that you see in the photo above. Other recent custom signs that hobbyists have created include the Drunken Clam sign for Family Guy and the Duff Beer and Moe’s Tavern sign for Simpson’s Pinball Party.

Many classic games produced in the late 80’s and early 90’s came straight from the factory with really unique and creative pinball machine toppers. Certain games that come to mind with outstanding and unique toppers are Tales from the Crypt, Whirlwind, Tee’d Off, and Strange Science. However, due to cost-saving measures, new games no longer come standard with a new pinball purchase. That leaves the market wide-open for suppliers like Pinball Life to create their own line of game-specific toppers. Toppers can be purchsed for $124.95 and include Star Trek: The Next Generation, Attack From Mars, Sopranos, and others.

In what I consider to be winner in the “most bang for your buck” category of mods is under-cabinet lighting. This affordable add-on can be purchased from suppliers like Pinball Life or LEDlightingkit.com for as little as $24.95. The ambiance it adds to your gameroom is astounding and really makes your game appealing to first-time visitors. DK Pinball recently created a custom  power-switcher mod to incorporate the under-cabinet lighting with the game’s general illumination making for some very exciting gameplay as show in the video above.

If there’s a mod or piece of bling that you’d like to see featured in the next roundup, add it in the comments section below