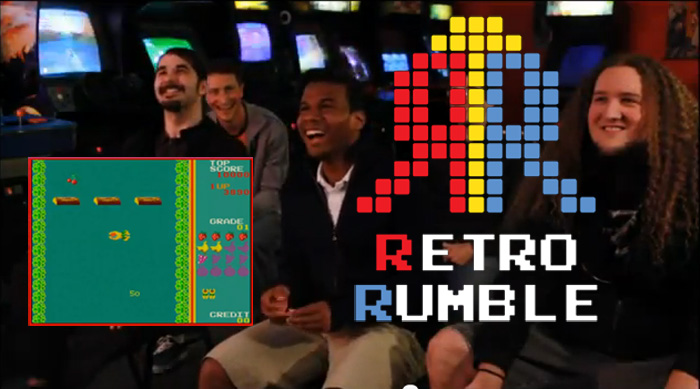 The folks behind Arcade-in-a-Box, Tucson’s only remaining arcade, have produced a new game show called “Retro Rumble.” Retro Rumble is a competition-style gameshow that pits three friends against each other in a showdown battle of classic arcade games. According to their rules, 3 participants duke it out over 6 randmonly-selected classic arcade titles one-at-a-time for only 60 seconds each to see who can get the high score! Retro Rumble states:

Retro Rumble is where the skilled gamers of today meet the best and the bizarre of classic gaming, and scrap it out solely for bragging rights.

Three episodes have already been released on You Tube and can be viewed on Retro Rumble’s website as well. Their claim of highlighting mainstream classics along with sleeper titles has already been proven by featuring the legendary Asteroids Deluxe on episode 2 and the little-known sleeper Swimmer on the very first episode. Episode three brings us the “shmup” classic 1943.

The shows are broken down into short five-minute episodes for easy consumption. The gameplay battles are fun, but it is the unrestricted commentary from real-life friends along with crowd reactions that make this show come to life. Gaming has become such a relatively solitary act that seeing these classics played in a group atmosphere will definitely draw you in and make you crave more!