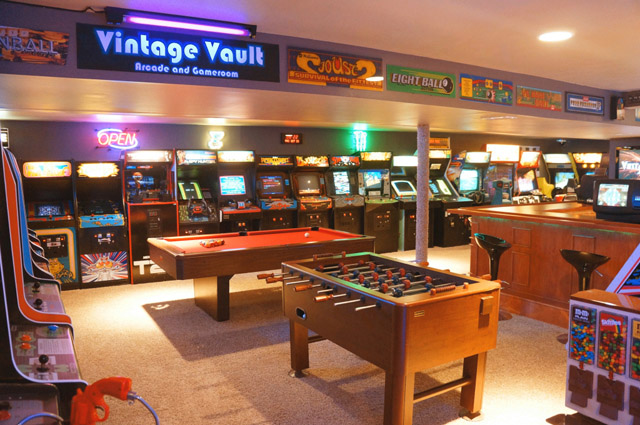 Remember when a quarter was a lot of money? If you were a child in the late seventies and early eighties, you knew the true value of a quarter – time spent slaying dragons or defending the galaxy. When the price of an arcade game rose to $.50, playing those new, high-cost games was a luxury and a real rarity. As kids, to actually own one of these electric monoliths and avoid pumping quarters in them over and over was a pipe dream. As it turns out, dreams do come true.

For Jeremy, some of his earliest memories were of the prolific nature of video games. They were everywhere – in laundrymats, gas stations, even grocery stores.  Grocery shopping with mom as a small child wasn’t considered a chore when he was dropped off at the arcade games near the front of the store with a pocket full of quarters to keep him occupied as his mother shopped. When the money ran out, there was still fun to be had by watching other kids play.

One of his fondest memories was at a Showbiz Pizza during his early teen years,

Showbiz pizza place WAS an arcade, with hardly any kiddie rides or ticket games, certainly not like these (types of) places are today.  I remember seeing the Space Ace arcade game at a Showbiz Pizza Place for the first time. Fifty cents was costly to a kid with no income, but I dared to play. I remember the game ate my quarters and I complained to an attendant. He went to the machine, opened up the coin door, and put something like 20 credits on the machine. THAT was my fondest memory, what seemed like an unlimited amount of gameplays on a machine I could barely afford to play.

Unlimited gameplay is now a fact of life for Jeremy. With over 40 arcade games, a pool table, foosball table, and full-size bar, The Vintage Vault Arcade and Gameroom offers unlimited fun…for free! However, a gameroom of this magnitude doesn’t appear from thin air, it has to start somewhere.

I used to browse various newsgroups in the early internet days of the mid 90’s. I found a newsgroup on videogame collecting and asked if anyone remembered a game called Mr. Do?s Wildride. I had only seen one mini golf arcade with that game as a kid and never saw one again.  Someone posted that they had a NOS kit and working cabinet that they would sell me for $300 total. That seemed like an offer of a lifetime, so I jumped on it and bought it.

That one game eventually multiplied, filling an entire 2-car garage full of games. A good job and a 4th child on the way prompted a move to a larger house. The only prerequisite? A walk-out basement for a dedicated gameroom. Jeremy and his family fulfilled that wish by purchasing a home that came with 1100 square feet of unfinished basement space, perfect for an arcade! With that many games, it took 2 full days of moving and 3 months of finishing the basement and setup before the Vintage Vault Arcade and Gameroom was a reality. 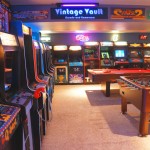 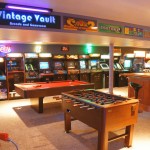 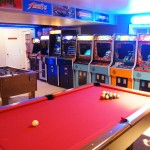 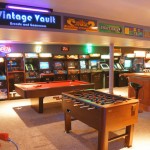 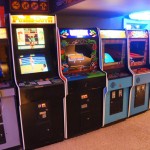 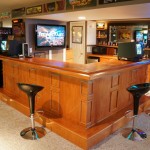 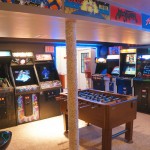 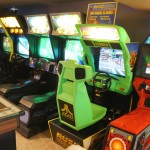 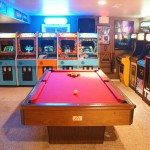 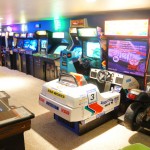 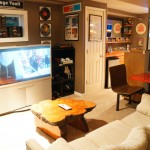 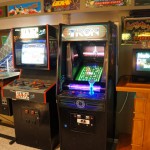 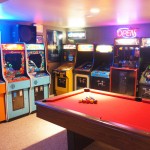 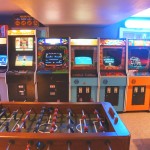 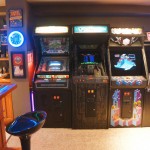 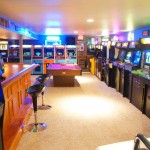 Aside from the amazing collection of games including classic arcade games, sit-down drivers, an electronic basketball game, and home game consoles, Jeremy’s favorite feature is the most personal.

My favorite feature of the gameroom is the custom built oak bar. I have to thank my father-in-law for that as it was his handiwork to help me build it. The original plans I came up with called for a smaller bar, but I needed an access panel over a floor drain so I extended the bar further out. The end result was perfect, as the larger bar makes the perfect island and gather place for the gameroom. The large LCD screen perfectly complements the area and I use it to play over 2000 music videos from my custom programmed video jukebox.

In this hobby, not all the entertainment is actually playing the game. Sometimes it comes from the stories we accumulate along the way. Jeremy’s favorites include picking up a full-sized Sega Rally Championship Deluxe that took the place of a kitchen table and had to be fully disassembled just to get it out of a mobile home. Or how about the time he purchased a Simpson’s cab off of ebay on a lark and ended up taking the family (and the game) on a 2-day vacation to Lake Michigan? Now that’s love.

Blinded by the grandeur of a collection of this magnitude, it may not be obvious at first glance that there aren’t any pinball machines in the Vintage Vault, but that’s about to change. Jeremy is currently on the lookout for some early 80’s Williams or 90’s DMD-era pinball machines to add to his collection, specifically a Williams Funhouse. However, that means that something else in his collection would have to go as he is currently maxed out on space. Most people would be deterred by this problem. Jeremy, however, won’t stop dreaming. Just don’t tell his wife.