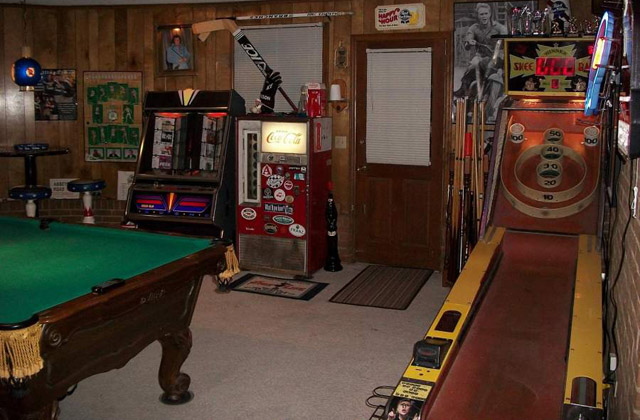 If variety is the “spice of life”, then grab the extinguisher from the wall because this gameroom is on fire! Tom T.’s gameroom doesn’t officially have a name, but with all the kitsch lining the walls along with the pinballs, bowlers, skeeball, pool table, and arcades covering the floor, it doesn’t really need one. All anyone needs to know is that this is a place where you can relax, reminisce, and play games!

My earliest memory is going to visit my cousins in SC and they had a ’63 Gottlieb Gaucho I would play it until I was ordered to eat dinner (then continue playing afterwards) until I was ordered to go to bed. I remember being fascinated when my uncle would have to lift the playfield occasionally to free a stuck relay or stepper…I was hooked!

Tom’s childhood memory wouldn’t become a modern-day obsession of his own until he acquired his first game back in 1987 – a Bally Bow and Arrow pinball machine. That one electromechanical game that he kept in his garage would spur 3 more that would be crammed into a spare bedroom. However, it wasn’t until Tom purchased his current home in 1999 that he would be able to have a dedicated space to be able to create the magnificent gameroom you see before you.

Tom recognizes that the “feel” of a gameroom is just as important as the games inside. Which is why, in recreating a pub or dive-bar ambiance, he made sure to cover the walls with as many beer lights, neon signs, and sports memorabilia as he could find. I have to say that the Billy Dee Williams Colt 45 sign is an especially nice touch!

To add to the dive-bar “vibe”, you can’t fail to mention the incredible coin-op equipment that makes it feel authentic including the pool table (along with a nice selection of cues), the ball bowler, and the mandatory jukebox. Pinball machines and video arcade machines are standard for almost any gameroom, but Tom’s selection of vintage EM games along with modern DMD pinballs and sit-down driving games proves to be a perfect mix of new and old. 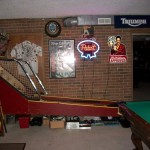 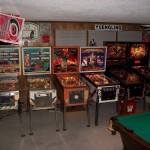 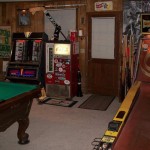 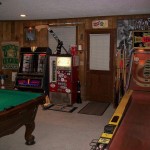 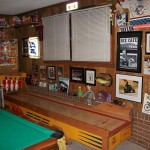 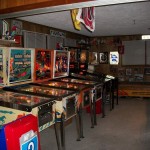 In addition to the skeeball machine, Tom’s favorite game is his ball bowler – both of which receive plenty of action and are big hits with party guests:

I got really lucky with my ’56 United Bowling Alley I knew someone that aquired it non working and knew nothing about arcade games I told him that I doubt he will find anyone local that can fix it well after a year he gave up and traded it to me for a working puck bowler!

In a fitting twist of fate, Tom’s was fortunate enough to own his very first love,

I did get a call from a friend one time about someone that had a game they wanted sell for cheap…it turned out to be a Gaucho just like the first game I played I grabbed it up and still have it.

While many may see his home arcade as perfect, Tom does have some future plans including opening up and incorporating a small bedroom right off the gameroom to turn into a bar and hopefully fit another game or two. Regardless, Tom T.’s gameroom makes me want to drink a cold one, play some games, and revel in the nostalgia of days gone by. Fortunately for Tom, in this pub, there’s no last call.