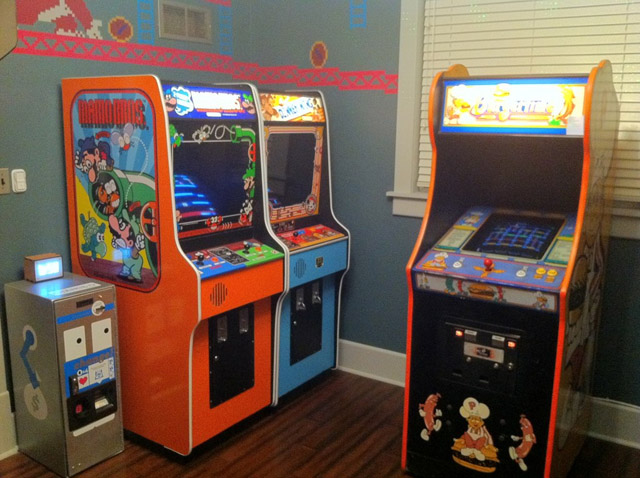 Let’s face it, not all of us can have an entire basement devoted to a gameroom, and most of us can only dream of putting on an addition to the house to accommodate our hobby. Surely, the majority of gameroom enthusiasts are allowed only a small portion of the house in which they have the opportunity to decorate with whatever games, decorations, and other geekery. That’s why Barry’s gameroom is so amazing. Despite a small space, Barry has managed to boast a gameroom that takes it to the next level.

Greeted by some amazing retro-looking signs that remind visitors that there’s no smoking, no fighting, and DEFINITELY no pooping (!), guests to Barry’s arcade are greeted by seven vintage arcade machines along with an incredible rush of nostalgia. While Barry certainly enjoys his games on a regular basis, back in the day the arcade was reserved for special occasions:

When I was in grade school, my mom would bribe me with a trip to the local arcade (and a full roll of quarters) if I’d ace 3 spelling tests in a row. It didn’t happen that often, but when it did, it was an event. I remember spending 90% of my money on the same few games.

Barrys may have multiple games now, but before he bought his current home, he only had a “primitive and slow” MAME machine be bought in 1990 to keep him company. However, over the past two years, he’s been collecting furiously going through 12 games, and keeping his favorites – some of which he’s traveled up to 10 hours for. 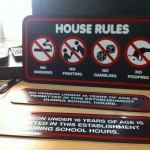 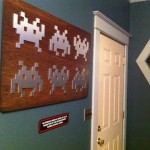 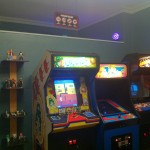 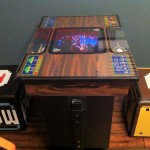 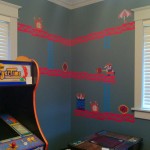 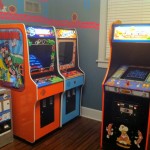 Being a designer, Barry couldn’t settle for just a room with games, which is why he has plenty of decorations and accessories that make this 12’ x 12’ room a place to escape and “forget about everything.” Obviously, aside from the games, the most noticeable thing in the gameroom is the Donkey Kong wall art which took two sets from Blik to cover one full wall and two half walls. Custom routed metal space invaders (previously featured on Gameroom Junkies) have been mounted to the wall as have shelves to display vintage action figures.

It’s not often that decorations are functional, but that’s the case with two custom-designed Mario Bros. stools for his Centipede cocktail. In fact, they are Barry’s favorite thing in his gameroom.

The custom Nintendo stools my girlfriend made for me are probably my favorite thing. She’s the seamstress and owner of barrysfarm.com. She refinished some ottomans purchased from Target with vinyl fabric to mimic the Nintendo Question Mark and POW blocks. She rocks! I also put a lot of love into my change machine, which I completely customized with a new paint job, and some custom printed vinyl decals. It’s a quarter dispensing robot butler!

When asked if he had any cool collecting stories, Barry replied,

Not really a collecting story, but a cool arcade story none-the-less. After playing a game of Journey, my younger brother wrote into Electronic Gaming Monthly telling them how much he thought it sucked. To everyone’s surprise, they printed the letter, and he got angry emails from Journey lovers for months to come. It’s still one of my favorites, and I’d love to have one someday, with a framed clipping of his printed letter next to it.

While I can’t see much room for improvement with his gameroom, I certainly hope that Journey is in his future. In the meantime, I thank Barry for letting us all drool over his current lineup and layout. I just hope everyone remembers to follow the rules!

If you’d like to see even more photos of Barry’s arcade, check out his picture in his Flickr album. Also, if you are looking for a kick-butt laptop cover or iphone case, check out his website.