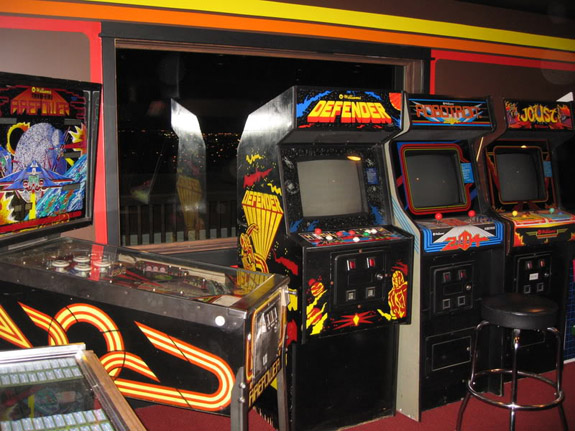 For most people who create a gameroom in their home, there are factors that dictate the size and layout. Some may want to have a gameroom that can hold 50 games, but if you’re limited to a space of only 300 square feet…it ain’t happening. It seems there’s always something we wish we could change. I know of many collectors who dream of moving to a different home with a larger floor plan or dream of adding on to their home to expand their collection one day. For most of us those are pipe dreams. For Brett Pulliam, those dreams became a reality.

What started with envy of a friend’s Defender in 1996 led to a Donkey Kong machine of his own shortly after. After buying games every few months, Brett’s collection continued to grow and grow. Although he originally started collecting when he was living in a loft, when looking to buy his current home Brett’s arcade collection was definitely a  top priority.

My goal for a new house was to have more space and make it as retro as possible. We bought our house as a fixer with a big empty backyard. I wanted my arcade to be as big as possible but not totally kill the resale value. We framed in windows for future resale and surrounded the arcade with a deck. I really wanted the arcade to flow with the house and not be a separate unit. You can see the arcade from the living room and even on the street if all the shades are open. 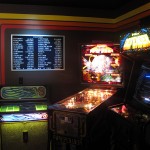 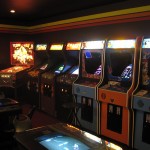 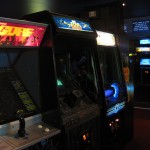 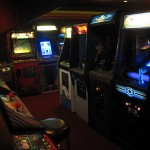 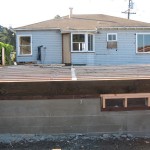 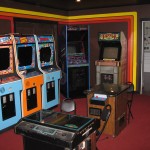 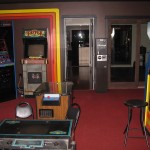 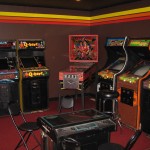 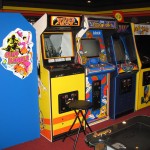 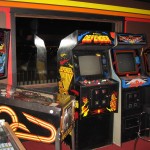 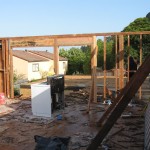 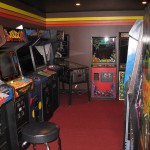 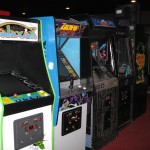 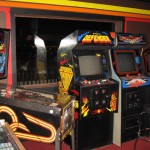 There’s a time period for classic arcades that is considered to be “The Golden Age”, before the huge industry crash. Brett has a self-imposed rule to only house games from this period, 1979-1983, in his collection. To keep in line with the time period of his games, he has completely decked out his arcade with the look and “feel” of that era. Large red, yellow, and orange stripes adorn the brown walls to bring a totally retro feel into this modern home. And to keep this space looking more like a functioning arcade than a museum, it is kept clean with no posters on the walls or toys atop the games.

Looking at his photos, it appears Brett has arranged his games by manufacturers. With their unique cabinet styles, one can clearly see an entire row of Nintendo and Taito games like Donkey Kong, Popeye, and Zookeeper. Bally and Williams games are represented as well by such classics as Galaxian, Gorf, Tron, Joust, Robotron, and Defender. Let’s not forget about small Gottlieb contingent of Qbert, and Mad Planets. The collection is rounded out with Atari titles like Food Fight, Millipede, and Quantum.

Although the majority of his collection is made up of arcade games, Brett has a few other items thrown in to complete the arcade such as his Firepower pinball machine, a jukebox, and a change machine. Another great feature of his gameroom has to be the large scoreboard on the wall to keep track of the latest high scores in the arcade. Along with the signs reminding visitors that no smoking is allowed, that youngsters must be accompanied by parents during school hours, and that all games require tokens, it’s hard to remember that the year is 2011 instead of 1983.

There have been a few lineup changes since the above pictures were taken, but the majority of the collection remains the same. With the exception of a desire to add more stripes near the scoreboard, dome mirrors in the corner, and possibly a lighted arch door entrance, there aren’t too many plans for the future. Although, there’s not really much to improve upon, and I’m sure many would say it’s perfect as it is. Being a collector in San Francisco, Brett’s favorite feature of his gameroom is the stunning view of the Golden Gate Bridge and the downtown skyline from the rear window – a fitting sight for someone who is successfully built a bridge to the past…to a golden age.