After much anticipation and hard work from organizer Tim Christie, the first-ever Atlanta Pin Swap went off without a hitch April 23, 2011. Without an-easily accessible show here in the Southeast and very little local get-togethers in recent memory, Tim generously offered up the warehouse he uses for his business to house the swap-meet-style event. Originally anticipating approximately 70 participants, a whopping 150 actually showed up to play pinball, purchase parts, and catch up with fellow pinball enthusiasts. 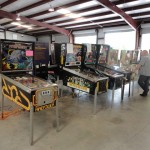 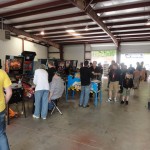 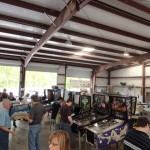 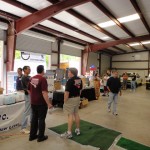 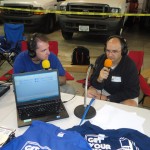 In addition to the guests, several parts suppliers showed up to the event including Marco Specialties, James Louflin and Pinball Inc, and Rottendog Amusements. Al Warner and Paul Kiefert of Pins and Vids fame were on hand as well as yours truly, Preston and Patrick of Gameroom Junkies, to promote our respective shows and hopefully sell some parts or a pinball machine or two along the way.

Nearly every era of pinball machine was represented and there were many highlights to the show including a prototype Twilight Zone, a custom Space Paranoids arcade game, a Visual Pin, and my favorite – a pristine Williams Shadow.  Many deals ended up taking place with proud new owners grinning ear-to-ear loading up their new toys while happy sellers dreamt of what new machine could now fill the void. A full list of pinball machines on at the swap meet can be found at the end of this post.

This being an open-air environment, Tim said not to expect a summer swap event due to the Georgia heat, but be on the lookout for one in the fall. Be sure to check out an exclusive interview with organizer Tim Christie and pinball tech James Lunceford that was recorded live at the event on our next Gameroom Junkies Podcast. I’d like to personally thank Tim for throwing an awesome get-together and starting something that can only continue to increase the love of the silverball.

Be sure to check out even more pictures at the Atlanta Pin Swap website.

Pinball Machines at the event:

Back to the Future