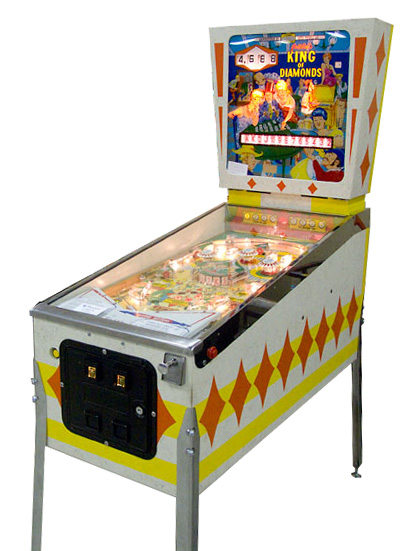 Who doesn’t love the classic look and feel of a vintage Gottlieb® pinball machine? The distinctive wedge-head shape and the click of the score reels define an entire era of pinball from the 1960’s. It seemed that for a long time, those vintage games were considered relics, lost to the past. However, what was old is now new again, as old-school pinball has been brought back to life with Retro Pinball, LLC’s NEW King of Diamonds Pinball machine!

It appears that gone are the days of only a single pinball manufacturer in the world as Retro Pinball currently has 30 of a soon-to-be 100 Limited Edition pinball machines ready to ship directly to consumers. These fully-licensed replicas of Gottlieb’s® 1967 classic King of Diamonds still maintain the classic look and feel of the EM classic, but on the inside, the game is run with modern circuitry and custom software. According to Gene Goodman, The first 100 limited edition games will all come with a chrome coin door, chrome legs, and a unique numbered plaque.

This project, a brain child of Herb Silvers, took many years to develop. According to Retro Pinball’s website,

The idea of the new retro pinball machine actually arose during a discussion among friends at an Arcade Game Auction in 2002, when Herb Silvers determined the King of Diamonds pinball by Gottlieb® was the best-selling game in his store. With an idea of making the pinball game electronic, Herb and Reinhard met a few months later to discuss and draw up plans for the new game. Using parts from the manufacturer Stern Pinball Inc., Herb and Reinhard created a prototype they revised during the next few years. An improved version was finally introduced at The Pinball Fantasy Las Vegas show, sponsored by Herb, and was presented to the public and game industry at the Chicago Pinball Expo in 2007 where it was an absolute hit! Gene Goodman and Michael Patz joined the team, shortly thereafter forming the Retro Pinball company. The company signed an agreement with Gottlieb® in July of 2007 and will be producing their new pinball game to distributors and home owners starting this year, 2010.

What’s even more amazing than the fact that old-school pinball machines are being manufactured again is the special, one-time-only price that is less than new-in-box Stern titles or the yet-to-be-released Jersey Jack Wizard of Oz! (Listen to our exclusive interview with Retro Pinball’s Gene Goodman below to find out exactly how much!) With the Gottlieb® license secured and a manufacturing process in place, future games could be on the horizon. Retro Pinball vows to stick to producing what the market demands. Whether that is continued production of vintage Gottlieb® EM games or a full-featured pinball title remains to be seen. However, what is certain is that with Retro Pinball throwing their hat into the pinball manufacturer’s ring the game has changed for the better. Says Gene, 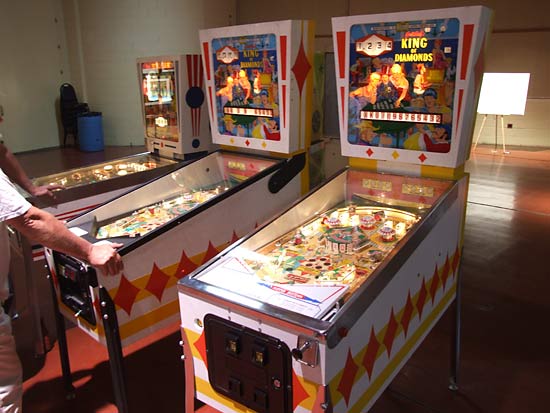 – Listen to the podcast of Episode 7 to hear an interview with Gene from Retro Pinball (interview starts around the 27 minute mark.
Episode 7

– Link to view a photo gallery of production pictures

– Link to information about the original 1967 King of Diamonds