Many game rooms are designed to transport you to another place. For some game rooms, the nostalgia of simply having several coin-operated games running at full volume is enough to achieve the desired effect. For others, a game room needs to have a more thought-out and refined design to “take you away.” For John P. McCann, current world record holder for the arcade version of Gorf, the latter holds true.

John completed his game room in 2001, but “completed” is a relative term. Constantly adding and upgrading his arcade gameroom has pushed his “Lost Highway” arcade to be a completely unique space that allows his guests to become lost in gameplay and ambiance.  John says, “I wanted my arcade to have a theme; something we all can talk about on top of the games.  The Lost Highway Arcade is what I came up with; it leaves a lot of things open for the creative mind.  UFO’s, downed pilots, danger areas, time warps, the craziness of actually driving down the highway(if you could).”

The transition from the “real world” to the “Lost Highway” begins with a trek down a staircase with clear warning signs cautioning the visitor to “yield to all UFO’s, robots, light cycles, planetoids, mutants, wizards, satellites, gridbugs, pods, centipedes, flaming barrels, baiters, ghosts, pterodactyls, warlocks, PT boats, grunts, meteors, swarmers, humanoids, and space avengers,” referencing the perils faced in many classic arcade games. With the warning text (custom-created by gamestencils.com) along with the unique lighting effect, stepping down those stairs leads one to wonder what he or she will encounter on their journey. 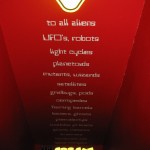 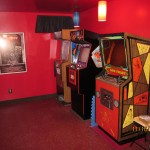 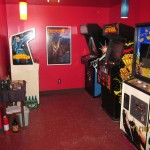 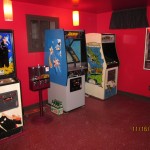 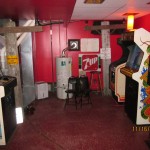 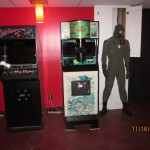 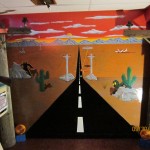 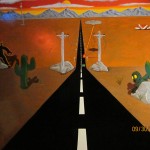 What one does encounter is a smattering several vintage arcade machines, memorabilia, and plenty of other truly unique items to bombard your senses. A signature feature in John’s game room has to be a custom mural painted on the wall. In regards to this, John says, “A friend of mine painted this mural for me.  The basic background look was inspired by Judas Priest’s “Headin’ out to the Highway” video.  The rest was basically my ideas with my buddy being a creative consultant along the way.” Not only does the forced perspective add to the feel of being on an endless road, but add to that REAL telephone poles! “There was an old pole about 30 yards behind my house(owned by an egg processing plant) that was no longer being used.   At 36 feet tall it got me 4 poles that fit nicely on the larger side of my arcade(2 on each end).  I made the crossbars and supports out of an old truck bed, and got the insulators and threaded wooden insulator mounts off ebay.  I searched ebay for a LONG time to find the signs I wanted for each pole that would best fit my theme.  The Please Dim Lights sign is a 1940’s reflective sign.  The vertical, red danger sign below it is from a railyard in Great Britain.  The sign on the right side pole is supposed to be for paintball but looks just like the downed pilot.”

John’s last comment brings me to my favorite feature of his gameroom – The “downed pilot” who, according to John, made his way out of the wreckage and into the Lost Highway arcade after being shot down by a UFO.  To up the “creep-factor” to eleven, glowing LED’s in the gas mask to bring him to life. He certainly looks real, but he’s really just a 6’2″ mannequin with an authentic Korean War pilot’s flight suit and a European WWII gas mask.

It can’t be called a game room without games, and the Lost Highway includes many classics. Galaxian, Defender, Wizard of Wor, Asteroids, Sea Wolf, and Centipede are only a few of the titles lining the walls. And don’t forget, we’re dealing with a world-record holder here, so it is only fitting to have a Gorf upright rounding out the collection. Creepshow posters, an antique telephone, and other collectibles complete this stunning example of a basement escape. Thanks for letting us get a peek in your gameroom John, and if you’re ever “lost”, we’ll know right where to find you.