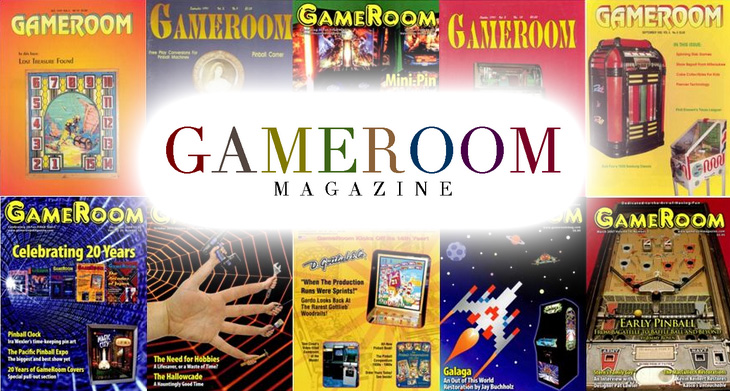 Originally founded in 1986, Gameroom Magazine ceased publication in October 2010. However, new owners Nic and Brooke Parks, have bought all assets for the magazine from former publisher Kevin Steele. Apparently the deal for the purchase of the rights went down back in May 2014, but the collector scene only started buzzing about the acquisition last week when postcards were sent to former subscribers.

In addition to the new Gameroom Magazine, the parks are also owners of The Pinball Company, a leading online retailer of new and used pinball and arcade machines. The magazine, which was formerly a monthly publication, will now be released quarterly, with the first issue launching in July. It is yet unclear what editorial direction the new owners will take other than retaining some popular features such as “Gameroom of the Month,” while continuing coverage of arcade and pinball topics.

New Owners Nic and Brooke Parks are already successful with their other business venture.

From the announcement on the Pinball Company’s website, new owner Nic Parks says,

“The magazine had been an industry reference since 1988, when it was first founded, through its last issue in October, 2010. We are so happy to be bringing GameRoom Magazine back into circulation as it ties in closely with The Pinball Company’s objective of shedding more light onto a growing industry.”

Invitations to potential writers have already been sent to industry veterans, so the gears are already in motion for the proposed July relaunch. Additionally, the new owners are seemingly sticking to the previous entity’s high standards for production quality with a promise for high-grade paper and binding along with high quality professional photography to accompany articles. The cost of a new four-issue subscription is $24, and can be submitted through The Pinball Company’s website.