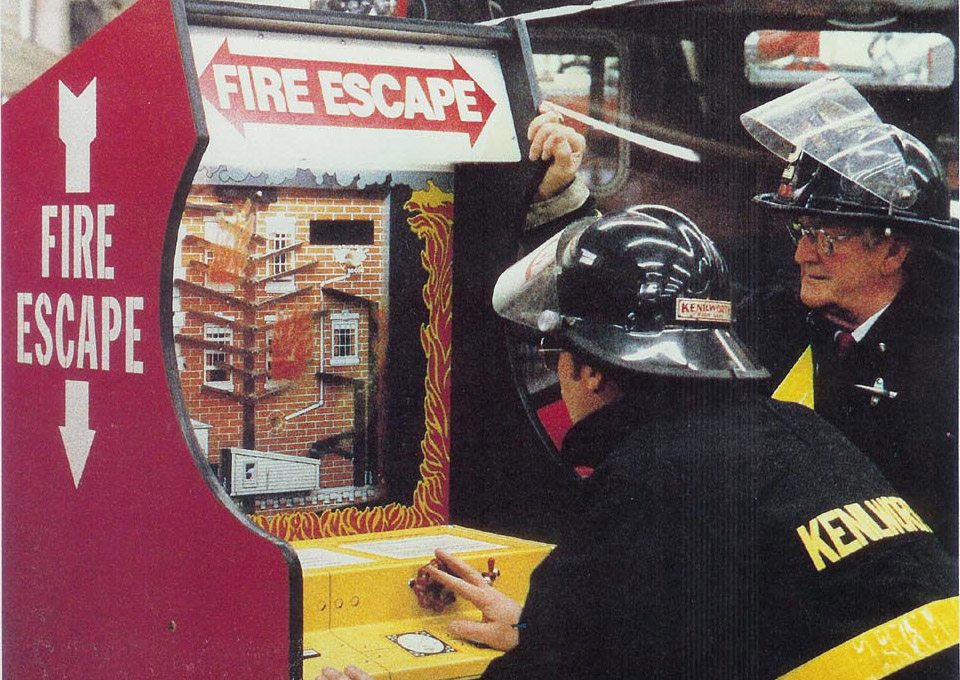 In this hobby, it isn’t too often that you come across a game that is in the original unopened manufacturer’s packaging from over 25 years ago. So it was quite surprising a few years ago when I stumbled upon a 2011 eBay Auction for a new-in-box arcade game named Fire Escape. At the time, I had already been collecting games for a while and I knew the name of almost every arcade game ever made, or so I thought. Fire Escape was unique to me in the fact that although it was built in a similar cabinet, it wasn’t a videogame. No, instead it was a mostly mechanical game that allowed players to maneuver a steel ball down a fire escape for points. Despite the novelty of the game, it was one that I ultimately forgot about. Until today… 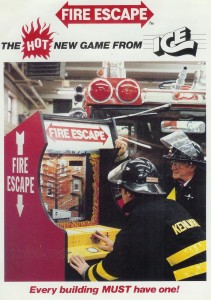 Forum user “arcadeguybuf” shared a story on KLOV about this interesting and often-overlooked game and how a cache of new Fire Escapes met a sad end:

The Fire Escape game was created here in Buffalo New York and the creator was a eccentric man and sold the idea to ICE of Amherst NY. After he sold the idea to them he started production in an old warehouse he owned. He was also a local vendor and filed the place up with games, parts etc…. Well when he finished his first run he returned to ICE and they laughed at him. The game was ‘significantly not as described’ and terminated the deal.Being a very ambitious person….he went out and sold the games anyway under the name Mech-Tronic Games Inc. to whoever bought them. Some games, if you’re lucky enough say ICE on them. So the sales weren’t that good and he had this huge warehouse full of Fire Escapes so he slowly over the years built them. I came into the seen when he answered an ad I had for arcade games ‘wanted’ in the local paper. He called me, I went to his place and he tried to sell me all his Fire Escapes for 12K but I said no and settled for the broken BZs, SWs and Tempests as well as piles of game boards. This is where I found “Computer Space Ball”.

Well as time went on we kept in touch and I went back on occasion to buy up stuff he wanted to get ride off. He really had tons of stuff. We kinda became friends and talked every know and then. Then one year I called him in the Spring to see what he wanted to clear out and the cell phone number went to someone else. I went to his warehouse and saw a public auction sign on it. I was like dam, what Happened? I waited for the auction but saw in paper it was cancelled and thought nothing of it at first… I cant recall how much time passed but I finally went back to his place….. When I got there HALF OF IT WAS DEMOLISHED! I went and talked to the job foreman and he gave me his daughters number who was in charge of his estate.

I found out they demolished the building with all the parts of the FIRE ESCAPE inside. all the cabinets and parts.The game wasn’t that good, we know that but now there is no way to get parts and make one anymore. IN my opinion the old man got his wish, the game is now more popular than ever and defiantly worth a little more than before

Forum user “astrp3” who operates the amazing historical blog The Golden Age Arcade Historian (which you should all go checkout and subscribe to) was able to use his knowledge to provide some corrections and further insight into the story. If the story is true, then it looks like a tiny amount of arcade history just got even smaller. I’m not entirely sure why Fire Escape never rose to the heights of Ice Cold Beer in collector circles, as it looks like it takes a similar level of skill. Take a look at the video below, and see for yourself. If you’re lucky enough to see a Fire Escape at a convention, be sure to play one. There aren’t many left.