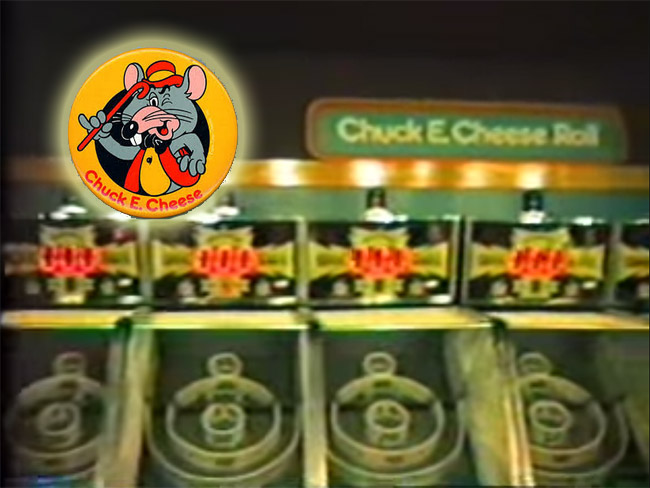 This video of a Chuck E. Cheese’s “Pizza Time Theater” in Phoenix, Arizona in 1983 is a thing of beauty. Not only am I a huge fan of found-footage VHS tapes, but the fact that we have such a thorough documenting of something we all enjoyed, but took for granted as children is just fantastic. Like many of you, I enjoyed several birthday parties and plenty of post-mall Saturday afternoons at Chuck E. Cheese’s, but as I grow older memories fade and are reduced to individual snapshots from photo albums. However, watching this video gives us an opportunity to remember exactly what we’ve been missing.

Although the video description doesn’t mention this, I want to say I remember that this is a video of a brand-new location before just before its grand opening. There are several really fantastic portions of this video, so let’s take a look at some of the highlights:

0:07 – Check out all those vintage cars and trucks. Is that a Volkswagon Beetle? Whoa! And that sign! Too retro.

0:38 – Inside shot. Looks like there’s a party room with an individual animatronic band member inside. I remember the band as a group, but forgot about the single-serving party room.

0:56 – We start a slow zoom into the robot’s face. Was anyone else scared that its eyes were going to pop open during that zoom? Brought back many “I’m not so sure about this” memories.

1:07 – Did anyone remember that Chuck E. Cheese sold beer? No wonder our parents tolerated us going to play video games. Also, maybe it was only through a kid’s palette, but I thought their pizza was good.

1:37 – Yes! We have a ball pit sighting. “The Beagle’s Ballroom.” Hmm…I never knew it had a name.  Honestly, it looks bigger than I expected it to as an adult. Rumor has it that there was a drain at the bottom of those things. Gross.

2:03 – This is hands down my favorite part of the video. The camera man/employee stumbles upon the manager crunching some numbers in the back room. Startled, he gives a huge smile and says, “What’s that? Is that a…? Hey, it’s one of those video things!” That phrase alone let’s us know just how much times have changed since Chuck E. Cheese was still relevant. Back in 1983 camcorders were still a fairly new commodity. They were big and they were expensive, but thank goodness they were around or we wouldn’t have this time capsule to enjoy!

All in all, this is a great piece of history. I’ve taken my own children to Chuck E. Cheese in recent years, and it just doesn’t hold that same magic anymore. I like my CEC dark, with a kids-sized mouse hole to crawl through, and packed wall-to-wall with arcade games. Times have changed, but at least we still have the memories.