Whether in a pizza parlor, corner store, or full-fledged arcade, growing up during the birth of classic arcades there was that one spot that was your favorite. Undoubtedly, you probably had a favorite game that used to eat all of your hard earned allowance that paradoxically provided you with unbridled joy along with never-ending frustration. Life progressed, years passed, but you never forgot that place – that game. Now, imagine driving past that sacred spot years later and seeing your beloved game abandoned by the dumpster, left to rot, and waiting for an unceremonious burial in the city landfill. Sometimes fate sneaks up behind you, other times it confronts you and slaps you in the face. 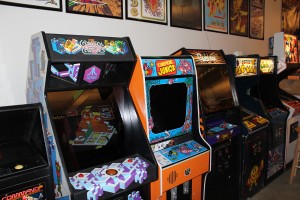 Casey Wales might not have realized it was fate when he salvaged a 1981 Galaga arcade game beside the dumpster of his childhood stomping grounds at the local bowling alley, but this would be the beginning of a journey that would eventually lead to Casey to create Robot City Games. An independent video game store would be cause enough to celebrate, but the classic arcade that fills half the store is what truly sets this establishment apart. At Robot City Games, the gamer battle cry of “know your roots” has been perfectly executed to allow us the opportunity to revisit our youth and pay respect to the icons that started it all by simply dropping in another quarter and pressing the start button.

It would take years before that Galaga pulled from the trash would take a place of honor among those other classic arcades. Casey would call T.V. repair shops and look online for help, but for years the knowledge needed to fix these games eluded him. It wasn’t until several years and a random internet search later that he was able to find a plethora of resources along with plenty of people eager to help before he brought his Galaga back to life.

By that time, Casey already had a store that had morphed from an anime/manga store into almost an entirely video game-centered store. He had the perfect place.

“I had this video game store with tables in the back to host card tournaments (Magic the Gathering, Yu-Gi-Oh) and there was room for a few games. The Galaga went back there, the Donkey Kong I got out of the garbage the same time as the Galaga needed a new power supply and cap kit, that went back there.. I found it was pretty easy to find new games. We lost some card tables and I had a whole row.” 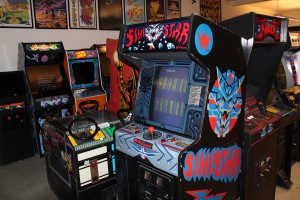 Growing up, aside from the bowling alley, Casey was able to visit Chuck E. Cheese on occasion, where his father knew the manager. The manager would take him to the back room where they kept huge barrels filled with tokens and allowed Casey to fill his pockets. Making sure he always wore plenty of pockets on those days, he’d use the tokens to spend time playing his favorite four: Galaga, Centipede, Pole Position, and Donkey Kong. He owns all of those titles now, including 22 other titles that fill his store.

When asked about the reaction from customers regarding the combination of classic arcade games saddled next to modern-day video game consoles, Casey responded,

“A lot of people just look at them and act like it’s a museum, they do that for the older console stuff as well. It’s always a positive response. The ambiance of having them on does a lot for the store. I guess a lot of people who play modern games and call themselves “gamers” think of it as their subculture’s roots. We get a lot of people in to see if we have the newest … game for (X-Box) 360 and come back later with their kids to show them how games used to be. We get a lot of 40-ish people bringing their kids in and a lot of college kids bringing their friends back to play.”

Currently Robot City Games’ 26 games includes a combination of classic titles like Q*Bert, Gyruss, and Crystal Castles, along with some lesser-known titles like Galpus, Crater Raider, and Satan’s Hollow. In addition to classic videogame posters, custom-animated lights and space invaders line the wall. In the future, Casey would like to expand Robot City Games to a different space in the same area that would allow the store to double in size and allow up to 50 arcade games!

From the earliest video games ever created, to the newest releases for X-Box or PS3, you have an opportunity to literally be surrounded by video games. Just make sure when you come to play, you have plenty of pockets and plenty of change. You may be there a while. 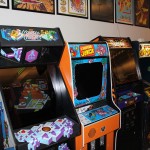 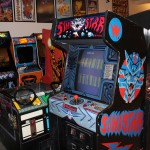 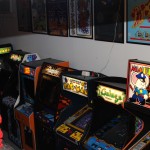 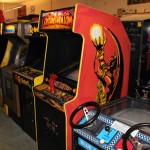 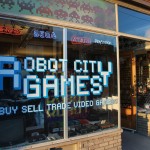 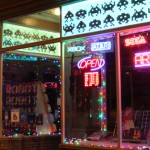 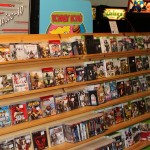 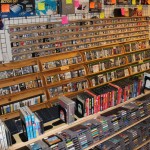 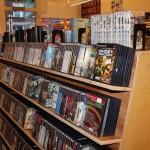