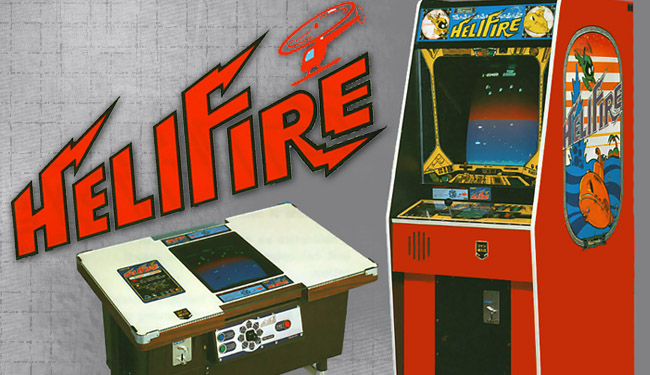 You may or may not know that Nintendo, as a company, has been around since 1889 when it first produced playing cards. But the Nintendo that you know and love began with Donkey Kong…or did it? Donkey Kong was released by the Japanese company in 1981, but did you know Nintendo produced other arcade titles prior to hitting it big with the big hairy beast? Unless you’re the most hardcore of Nintendo fans or arcade fanatics, it’s doubtful that you’ve ever heard of, much less seen, some of Nintendo’s earliest forays into arcade games:  Sheriff, Space Firebird, Radarscope, and the topic of our article today – Helifire! 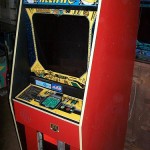 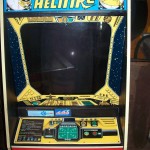 The Helifire arcade game was released in September 1980, two months before Radarscope (of which unsold units would later be converted into the seminal classic, Donkey Kong, in 1981). The goal of the game was to control a submarine that would launch missiles to combat droves of helicopters above. Not only does the player have to destroy the helicopters and avoid their rain of fire, but he also has to be wary of the ships and mines in the water. As the player clears each level, the water level raises placing the sub closer and closer to danger.

While instantly recognizable as a Nintendo arcade, the cabinet design sports a more angled look and is slightly different than the familiar plywood cabinet of Nintendo’s “golden age”. Although the videogame’s screen appears to be colored, the CRT was actually only black and white monitor with a colored plastic gel overlay strategically placed on top. The raster graphics appeared in stunning 224×256 resolution! If you weren’t a fan of the standard upright cabinet, Nintendo also produced a smaller “cocktail” version.

While the production numbers of this game are unknown, it was presumably a low run with Nintendo not yet being a major player of the arcade scene. I was fortunate enough to come across one in a warehouse raid several years ago, which is where I got the pictures for this article. To recoup some of my expense for the warehouse buyout, I was able to quickly sell the game to a collector and historian of early Nintendo coin-op. Fortunately, I know the game has been placed in good hands and its restoration progress can be followed here.

If you remember playing one of these in the arcade or if you have any further information to add, please share it with us in the comments section below. If you’ve never played this game, be sure to check it out in MAME and let us know your thoughts on this forgotten gem.