Are you still feeling the patriotic passion held over from your firework-filled 4th of July? Why not make Uncle Sam proud and add a constant reminder of the United States’ independence with one of these All-American games to your gameroom? 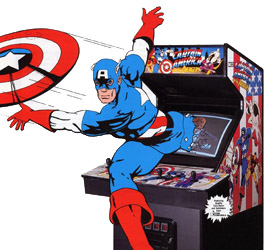 #5 – Captain America and the Avengers

This classic arcade game from Data East pits you, as the heroic Captain America, and pits you against all kinds of freedom-hating enemies like Whirlwind and the Red Skull. This 4-player cabinet allows you to play along with three of your friends who can choose between Cap’s Avenger teammates Iron Man, Vision, and Hawkeye. The stars and stripes never made anyone as black and blue as in this 1991 arcade smash! 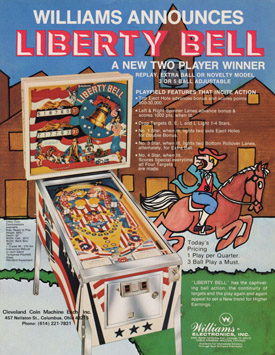 Patriotic fever abounded in 1977, just coming off the coattails of America’s Bicentennial celebration. What better way to celebrate such a momentous occasion than with a pinball machine that screams “Let Freedom Ring, Dammit!” William’s classic 2-player electro-mechanical pinball machine features a horseback-riding Paul Revere, the drafter of our Declaration of Independence Thomas Jefferson, Independence Hall, a big-ass Liberty bell (duh), oh and the Statue of Liberty and the iconic Iwo Jima flag-raising just for good measure. In case you forgot what our flag looks like, Williams made sure you remembered by plastering the old red, white, and blue all over this machine.

Plus, this pinball was manufactured in the Good Ole USA! 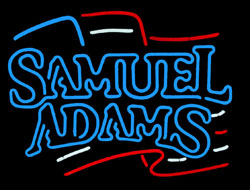 If there’s one thing we do in America, that’s live in excess – and HOW! We didn’t get to be masters of our domain without a few beers along the way. What better way to celebrate one America’s founding fathers than to name a beer after Samuel Adams. For those unfamiliar, Sam Adams was a leader whose ideas paved the way for the Boston Tea Party and what would become the American Revolution from Britain. In 1985, a Boston beer company capitalized on the revolutionary and former governor of Massachusetts by creating Samuel Adams Boston Lager which has since become an award-winning national brand. (And this Gameroom Junkie’s beer of choice). Since wall decorations make up a large part of any gameroom, make sure you have your favorite patriot represented in glowing neon. 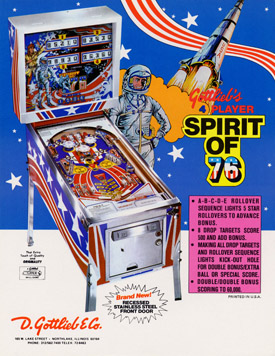 Rather than being a day late and a dollar short, D. Gottlieb and Co. were ahead of the Bicentennial bandwagon and released this gem of a pinball machine in 1975 in anticipation of America’s birthday. “I Am America!” (and so can you!) screams this silkscreened backglass by showcasing America’s pioneers. Frontier pioneer Davy Crockett (presumably?) in his ‘coonskin cap stands side-by-side with a more modern pioneer of space. This 4-player silverball classic features two banks of drop-targets touting our bicentennial – 1776-1976. Shoot for the stars and make America proud.

“Old Glory” never looked so good on four legs. So be sure to shoot for the stars (and stripes – zing!) in this silverball classic, and make America proud. Glory, glory, hallelujah! 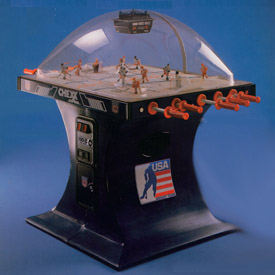 “USA! USA! USA!” Who knew that a single game could scream “Screw You Communism!” so well as this example of patriotism from the 80’s? Still reveling in the defeat of the Soviet Union during the 1980 Olympic hockey match that riveted a nation and asked us the question “Do you believe in miracles? ” (answer: yes), the gaming company ICE developed a way for each and every American with a quarter to battle Red against Blue. Taking a page from foosball’s handbook, ICE created a game that allows players to move miniature hockey players up and down the rink while spinning around to shoot the puck in the goal using rods with spinning handles. Slapshots and high-fives abound while playing this buzzer-sounding classic from 1983. As far as I know, this cold-war masterpiece remains relatively unchanged and is still in production today.

There were plenty of patriotic additions I didn’t include in this list (honorable mention goes to Bally’s “Freedom” pinball), so if you have something you think should be added to this list, share it in the comments!