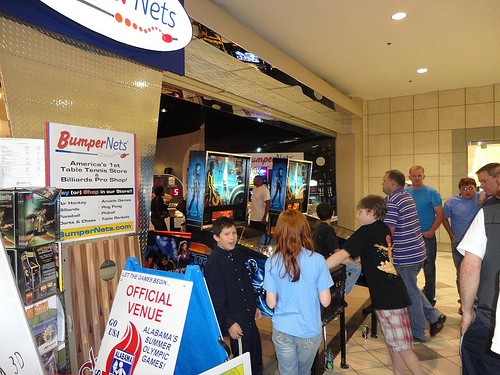 The official launch of Stern Pinball’s Tron pinball machine was celebrated Friday, June 10 at locations across the United States.  I was fortunate to have a launch party within driving distance from me, so I left work early and hopped in my car to travel from Atlanta to Birmingham. Just like several previous Stern launch parties here in the South, Tron was debuted at Bumpernets located just outside Birmingham in the Riverchase Galleria mall. I was excited to be able to attend, but even more excited because of the main attraction: TRON!!! 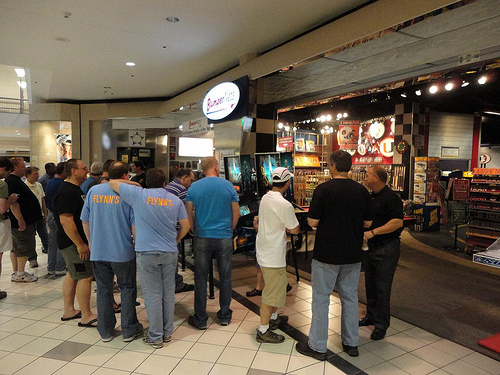 The crowd anxiously awaits their turn on the new Tron: Legacy

By the time I arrived, a crowd had already gathered around the two freshly-unboxed Trons. Free play had just started and folks were already flipping away like crazy. I quickly got in line to get on a 4-player game. My first impression of the game was that it was FAST, FAST, FAST! I don’t know if it was just the design or if the fact that it was a virgin playfield had anything to do with it, but wow! However, after my initial thought processed, my next realization was that this game was mean.

I kept draining on the right outlane and was posting some pretty pathetic scores. Being totally green on the machine, the upper left flipper shot was practically impossible to hit. I was posting scores of 2 million, then 4 million – all the while looking at some of the other players getting in the teens or even 20 million plus. It was clear I was not going to be a contender, but hey, I just came here to play.

With some relatively short ball times, I was able to get in about 5 games before the tournament officially started. I gladly paid my $5 to enter and out of 29 total participants, I drew the #3 slot. Whew! At least I could get my embarrassment out of the way quickly, then I could focus on playing all the other Stern pinball machines on location that I had never played and still have a great night. This being my first tournament, I only had one goal: don’t make a fool out of myself. 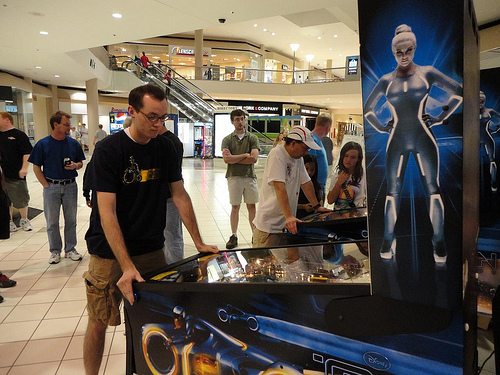 Trying to master the multiball. Check out the "Tron: Ancestry" T-shirt

My highest score I posted during free play was 9 million, which appeared to be the average score. I hoped to at least match that score and maintain some sort of dignity instead of my measly 1.8M score earlier. While the practice games I played on the machine allowed me the opportunity to familiarize myself with the game, the real tournament play would be a totally different environment as I wouldn’t be taking turns with anyone and would get 3 balls in a row.

I stepped up to the machine and plunged the ball. My strategy would be to get multiball at all costs. I shot the recognizer as many times as possible and eventually the target bank dropped and revealed the spinning disc. After defending myself from the return fire of the unpredictable spinning disc, I got multiball and finished my game with a score of 13 million. Mission: “Don’t-make-an-ass-out-of-yourself” = accomplished.

I was immediately in first place, but totally anticipated being knocked out of the running in short order. My score held for the next three players and I was finally pushed to second place by the next player. It didn’t happen as fast as I would have thought , but by the time all 29 contestants had finished their run on the game, I was in 7th place. Nothing to brag about, but still in the top 3rd of players and it allowed me to qualify for “B” division playoff while “A” division played for 1st – 4th place titles, cash prizes, and possibly a signed Tron translite.

In the playoff, I went for the same goal : multiball. This time, I hit the shots more often and got multiball earlier and was able to stack multiballs and endure the fury of silverballs that ensued. Surprisingly, I scored more than double my original tournament score with a very respectable 32 million. In fact, this turned out to be the 2nd highest tournament score of the entire night, but because of my earlier placement I ended the night in 5th place and took home a whopping $5! (yes, you read that right – five dollars. My entrance fee). More important than the money was the pride I had from not making a fool of myself. 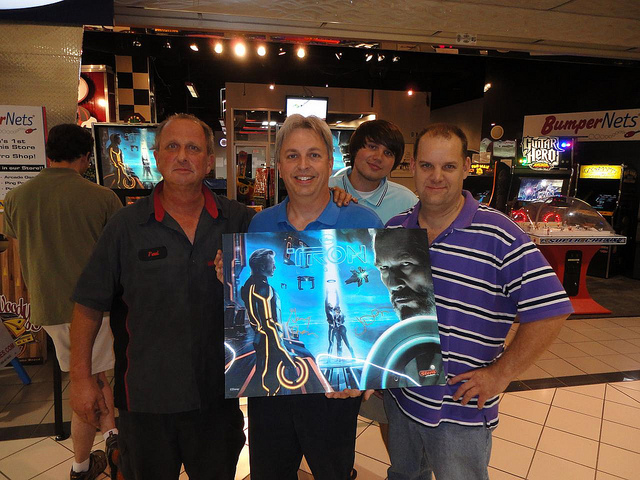 However exciting the tournament was, the most exciting thing that night was witnessing Timmy, a young 12-year old pinball wizard, earn 76 million points on his FIRST BALL. Just to show you that in pinball each game is different, Timmy was eliminated from the tournament without making It into the top 8. However, while the top 4 players were competing for #1, he played on the second machine, acquired “Sea of Simulation” wizard mode, and finished out the night securing the Grand Champion spot on the machine with a score of 96 Million! 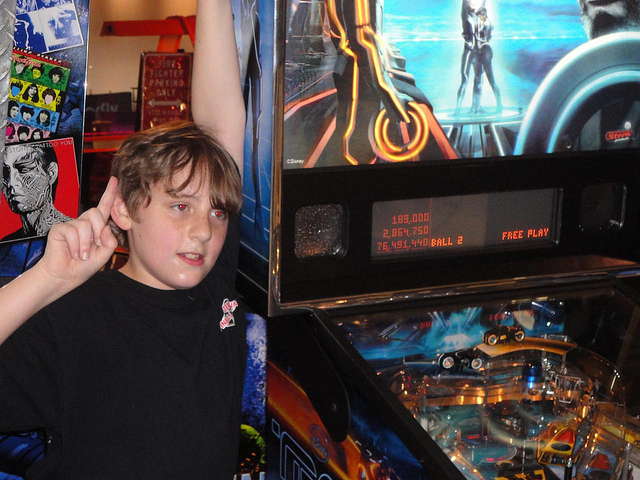 Overall, I had a fantastic time and am very envious of local Birmingham residents who have such an amazing facility like Bumpernets at their disposal. I hope they appreciate what a treasure they have at their doorsteps. As far as Tron pinball goes, it is easily the best game Stern pinball has put out in recent memory. Although the ball times are shorter and it totally kicked my butt, I always wanted to come right back to not let it get the best of me, which is a great quality in a pinball machine. The artwork package is great, the music is fantastic, and the playfield layout is simple enough for the novice player to understand, but challenging to master. I can’t wait to add one to my collection.

For those of you who haven’t been to Bumpernets before, check out the video walkthrough I took during the launch party. Impressive: