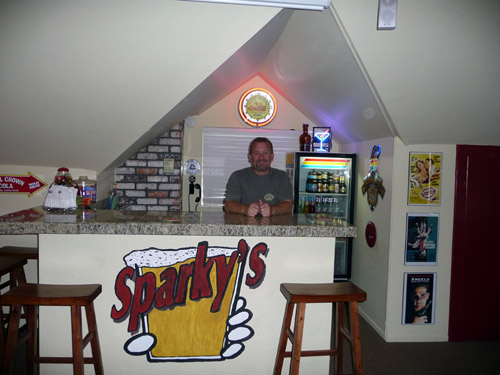 Mark Malmberg had a normal childhood, that is until one fateful trip with his family to a diner in 1975. That was where he would encounter a pinball machine being played by a sordid-looking teenager smoking a cigarette. Mesmerized by the machine, Mark couldn’t take his eyes off of it. That’s why, once the machine was unoccupied, Mark asked his parents if he could just go look at the pinball machine. However, once he stepped up and pressed the start button, a free credit made the game come to life, a ball made its way into the shooter lane, the plunger was pulled, and Mark was hooked.

He may have been hooked on the silverball early in life, but it wasn’t until he was an adult that he owned his first machine. An ad in the local paper for a pinball machine prompted him to buy a non-working Hocus Pocus for only $75. The repairs were out of his league and required some professional assistance, but that first machine was enough to become addicted to the hobby.

Mark, or Sparky as he’s also known, has owned about 40 machines in the last five years, but he only has room for three at any given time, so they get traded, sold, and rotated quite a bit. Just having three pinball machines doesn’t mean Mark’s gameroom is anything to snub your nose at. In addition to his current pinball lineup of Creature From the Black Lagoon, Black Knight, and The Getaway, Sparky has a full-featured MAME machine, a slot machine, a juke box, megatouch, and a CD replica jukebox. 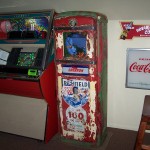 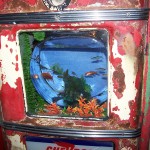 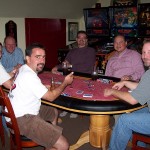 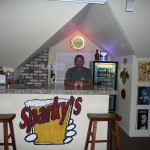 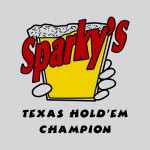 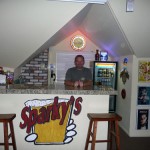 As far as decorations for his gameroom, Mark has traffic lights, drive-in speakers, parking meters, an antique phone, neon signs, movie posters, and more. Hidden from view, but easily accessible is a pull-down 8’ screen for his DVD projector to play movies. The biggest draw to Mark’s gameroom, however, is the 10-seat Texas Hold’em poker table. Each month, a regular group of guys come to play cards, and every other month a collection of up to 20 players congregate to compete in Sparky’s Texas Hold’em Tournament where the winner earns a championship t-shirt.

Over the years, Sparky has had many experiences that make for great stories:

My friend’s dad had a gameroom/bar in his barn, but they had a fire.  My friend told me his dad’s T2 pinball got a little burned, and they were throwing it out.  I made arrangements to meet my friend there to see what I could salvage, but to our shock and surprise, his dad had already thrown it in the construction dumpster (big enough to fit four cars inside)!  I could see a leg sticking out at the bottom, underneath all kinds of construction garbage.  After digging through and throwing chunks of concrete out of the way for about an hour, I managed to find the complete playfield, which was the only thing worth saving.  I had been in my work clothes and nice shoes, and I was filthy!  I think I ruined my shoes!

As you can see from his poker tournaments, Mark is in this hobby for more than the games, he’s in it for the community. Which is why if you’re traveling to the upcoming Pin-A-Go-Go in Northern California, be on the lookout for Sparky’s camper and the now-annual BBQ that is trending to serve upwards of 50 people this year! Maybe soon he’ll have to open his own diner where I’m sure a young kid could stumble upon another pinball machine or two.