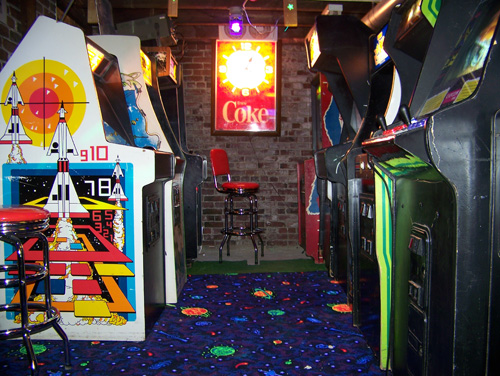 Back in the glory days, there were plenty of arcades located in malls or shopping centers. Many of them were well-lit, open-spaced, and devoid of any “personality” aside from the games themselves. However, many more arcades popped up wherever there was available space – in the back room of a gas station, in the corner of a 7-11, in the basement of a rec center, and more. THOSE were the cool arcades,  the seemingly seedy underbelly of this pixilated plateau.  So much for franchised blandness, give me the “real” gamerooms of yesteryear any day. It is with those “back-alley” gamerooms in mind that I present to you, The Game Pit!

Located in the basement of Scott Gaulin’s home, The Game Pit is a throwback to those well-worn, and well-loved gamerooms of the past. With exposed brick walls, air ducts, and electrical wiring, you realize the focus of Scott’s gameroom is actually playing and enjoying those well-loved games. And Scott certainly has a lot of experience in that regard.

I’m trying to create an arcade feel with my gameroom.   I worked in the arcades back in the day so it is really important for me to capture that atmosphere. I started out at Dream Machine in our local mall in high school.   It was done up as a warehouse with lots of wooden crate panels for walls.  It was a smaller store with only about 40-60 games in it at one time.  I was hooked. Every month we had to clean every game inside and out.   To be able to look inside those games was such a rush back then.   Lots of memories of the weekend crowd, not being able to walk the floor due to so many people crammed in to the place.

I then moved west to Ohio for college, (and) worked at a(n) Aladdin’s Castle in the local mall.   Biggest difference between the two places is tokens vs quarters.   Aladdin’s Castle used tokens for all the games and because of this the maintenance of the machines wasn’t as regular. What was very similar was the fact that both sold off their games.  In fact we got a new price list of our games in each month.   It was great looking at prices figuring out if I could buy something or not. (I) bought my first games back in ’88: Space Invaders was the first at $50, Bump n Jump was the second at $165, and KISS pinball was the 3rd at $195.  I sold the KISS back in ’96 for $550

You would think starting out with such an early start with access to games that his collection would be with him forever. Well, as life would have it, a move back to New Hampshire, some lost repair contacts, marriage, tight budgets, and small apartments hindered a growing collection. In fact, it wasn’t until 2006 and a new house (with a basement!!) that Scott ventured out to find someone to repair his problematic Space Invaders Deluxe that his passion returned.  After discovering KLOV in late 2007 and finding arcade repair wizard Sara St. John at www.myarcaderepair.com in his own backyard, Scott’s gameroom has now exploded to its current number of 20+ classics. 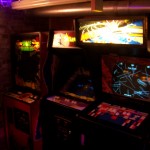 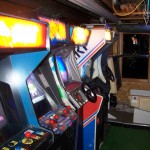 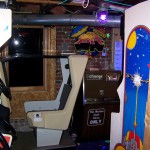 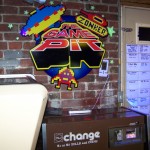 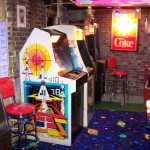 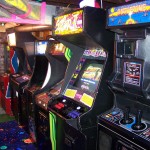 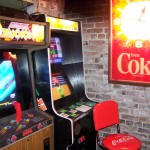 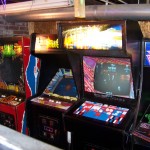 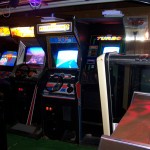 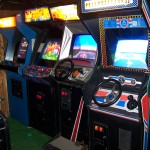 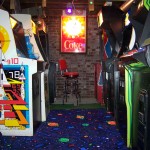 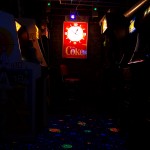 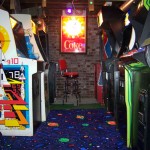 From bona-fide classics such as Missile Command, Pole Position, and Galaxian, fantastic vector games like Star Castle, Asteroids, and Battle Zone, to modern classics like Smash TV, Outrun, and Street Fighter II, The Game Pit offers something for everyone. Aside from the plethora of pixilated awesomeness surrounding them, visitor’s eyes are immediately fixated to the custom “The Game Pit” arcade sign hanging on the wall. While some blacklight carpet, coke signs, and barstools round out the visual aesthetics, a Rowe BC25 “Big Brown” takes care of the practical side of the house dispensing plenty of tokens to feed the seductive glowing monsters calling players back for more.

Personally, my favorite aspect of The Game Pit is the hand-written high-score notecards that cover one wall of the gameroom. It’s touches like this that make gamerooms personal. I love the challenge it poses and the connection to friends and family that it represents. However, I have to say, I might put a dent in that Frogger score.

When asked what was in store for the future of The Game Pit, Scott tells us custom-designed tokens, a beta brite sign with scrolling high score lists, video monitors with video jukebox playing, and a pinball (specifically “A nice title from the early Solid State era would be ideal.  ’78 to ’87 Williams or Bally would be a perfect fit.”) would be nice additions. Additionally, Scott will continue to spend one day a week helping out Gary at American Classic Arcade Museum (ACAM), presumably so he can play in the largest gameroom on earth.   He says that every day is different, changing marquis lights, fixing games, cleaning pins, and enjoying the glory days of the 80’s. Somehow, I have a feeling that years from now, Scott can look back at his time spent with family and friends in his own gameroom and want to relive those “glory days.”

Scott would like us to remind you that ACAM is having a fund raiser right now.  So far only 21 people has stepped up to help and they have a long way to go.  Vist http://www.classicarcademuseum.org/ today and make your contribution to keeping arcades alive.